The world body listed two pre-requisites for it to consider the lifting of the ban on India, which made it clear that the government's Sports Code will have no relevance. 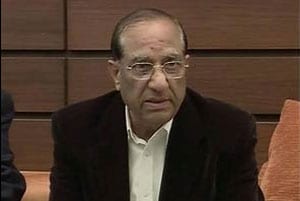 The International Olympic Committee (IOC) on Monday proposed to hold a meeting with Indian Olympic Association (IOA) and government representativeS while maintaining that it would consider lifting of the ban on India only if the IOA holds elections solely under the Olympic Charter.

In a letter written to V K Malhotra, who was the acting IOA chief before the controversial elections, and the IOC member Randhir Singh, the International Olympic Committee made it clear that it will not deal with the current dispensation led by Abhay Singh Chautala.

The world body listed two pre-requisites for it to consider the lifting of the ban on India, which made it clear that the government's Sports Code will have no relevance.

"The suspended IOA must be in a position to hold free, fair, transparent and credible elections without any external interference and exclusively on the basis of Olympic Charter and IOA's Constitution. For that purpose, relevant government authorities definitively amend or repeal any government regulations or laws which interfere with autonomous functioning and internal operations (including election rules).

"... and the suspended IOA reviews its own constitution and internal regulations and makes any necessary amendments, in close collaboration with the IOC and subject to IOC's approval, to improve its internal governance and include proper and concrete mechanisms to ensure good governance at all levels and implement all basic ethical principles," the letter said.

"The conditions are a prerequisite for the IOC Executive BoardÂ  to consider lifting the suspension of the IOA," said the letter signed by IOC Director of NOC relations Pere Miro and Olympic Council of Asia Director General & Technical Director Husain Al-Musallam.

The IOC said that "in order to start working closely together for the purpose of achieving the objectives and establishing a clear roadmap with deadlines, it is hereby proposed to hold a first joint meeting in Lausanne with you and a Senior Representative of the Government of India as soon as possible".

"We look forward to receiving your acceptance of the above-noted actions and process, and, should this be the case, we would be happy to organise this joint meeting as soon as possible and extend an invitation to you and to the Government of India," said the letter a copy of which was also marked to IOC chief Jacques Rogge and OCA President Sheikh Ahmad Al Fahad Al Sabah.

The Chautala-led officials have been asking the IOC for a meeting since their election in the controversy-marred December 5 polls but the world body has not accepted the request.

Terming the Chautala-led office bearers as "illegitimate individuals", the IOC also warned the sports federations in the country not to associate with them and desist from attending any meeting convened by them.

The world body said it would ask the international federations to take action against the NSFs who associate with the Chautala-led dispensation.

"The IOC and OCA have been following the increasingly confusing situation surrounding the suspended IOA, caused by the irresponsible attitude of a number of illegitimate individuals purporting to act on behalf of the suspended IOA in violation of all IOC decisions and the Olympic Charter," the IOC said.

"In the event that any federation associates itself with these individuals, in violation of IOC's decisions and Olympic Charter, the IOC will ask the International Federation concerned to take necessary action," the letter stated.

The IOC also authorised Malhotra and Randhir "to take all necessary measures" against Chautala and the other office bearers "at the national level, including any appropriate legal action, to stop their illegal activities with immediate effect and to protect the interests and assets of the suspended IOA".

It said "the irresponsible behaviour of these individuals is serving only to aggravate the situation of the suspended IOA by adding unnecessary complications, thereby delaying the resolution of the pending issues. They must be held responsible for that before the athletes and the Olympic and Sports Movement in India."

The IOA has called a meeting of its Executive Council on January 19 here, the first assembly of the office bearers after being barred from the Olympic family, thereby blatantly defying the IOC's diktat not to conduct any official activity after its suspension last month.

Comments
Topics mentioned in this article
Olympics 2012 Randhir Singh Other Sports
Get the latest updates on India vs South Africa and check out  Schedule, Results and Live Score. Like us on Facebook or follow us on Twitter for more sports updates. You can also download the NDTV Cricket app for Android or iOS.