As a meaningless 110-106 loss to the depleted San Antonio Spurs wound down on Wednesday, the crowd stood and chanted "We want Nash" over and over. 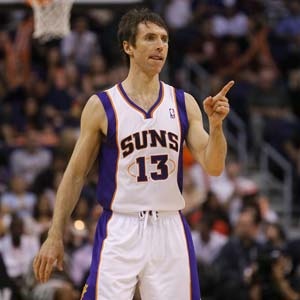 As a meaningless 110-106 loss to the depleted San Antonio Spurs wound down on Wednesday, the crowd stood and chanted "We want Nash" over and over.

First it was just a few fans. Then it spread through the whole building.

Finally, coach Alvin Gentry sent the 38-year-old point guard back onto the court for a few plays before Nash left to rousing cheers.

"It was obviously amazing to get that type of reception and support," Nash said. "It's very special because it's not something I asked for or imagined to get that type of spontaneous reaction. It means it's authentic, the relationship that I thought we had."

Nash, a free agent at the end of the season after eight years with the Suns, said he will take time to explore his options.

"I'm in no rush," he said. "I think it's important to take my time and just gain some perspective on what's happened in my career and what the future may hold. It's just a lot of speculation at this point."

Gentry said he put Nash back in the game to get the ovation he deserved.

"He was a guy that made guys better," said Gentry, who was with the Suns for all eight of Nash's seasons, either as an assistant or head coach. "It was fun to watch him play and to be with him for eight years, and what he has accomplished here, and what he has done for this franchise and for my coaching career, is priceless."

Patty Mills scored 27 points and Tiago Splitter had 26 in San Antonio's ninth win in a row.

"It's one of those funny situations, end of the season and resting guys," Mills said. "As crazy as it is, it does make a lot of sense. I thought for the main guys to go back and recharge the batteries before the playoffs, that's a chance to give the other guys a great opportunity."

The Spurs, already guaranteed the No. 1 playoff spot in the Western Conference, remain tied with Chicago for the best record in the NBA with one game to play.

The Bulls hold the tiebreaker with a win over San Antonio in their only regular-season meeting, and the issue apparently is not that important to the Spurs given the fact they aren't playing their three stars and don't even have their coach.

Phoenix were eliminated from playoff contention with a loss at Utah on Tuesday.

Nash had eight points and seven assists in just 18 minutes, all of his points coming in the third quarter. The two-time league MVP left the game with 3:08 to go in the third quarter and probably would have stayed on the sideline had the crowd not demanded his return.

As he left the court the final time to cheers, Nash looked down but waved his right index finger briefly to the crowd.

Nash was scoreless with four assists in just 8 minutes in the first half but scored eight points on 4-of-5 shooting in the third quarter. He made a driving reverse layup from the baseline, then assisted on the next two baskets to put Phoenix ahead 76-70 in the third quarter. He left the game with 3:08 left in the period and the Suns up 76-75. The game was tied at 82 entering the fourth.

Sebastian Telfair missed a 21-footer that would have tied it with 20 seconds left before Mills made two free throws with 12.3 seconds left to put it away.

Shannon Brown had 21 points and Telfair added 20 for the Suns.

Comments
Topics mentioned in this article
Phoenix Suns Steve Nash Shannon Brown NBA
Get the latest Cricket news, check out the India cricket schedule, Cricket live score . Like us on Facebook or follow us on Twitter for more sports updates. You can also download the NDTV Cricket app for Android or iOS.