Detroit's Kyle Singler top scored with 18 points in a team effort by the Pistons, who led by 18 points and saw that whittled back to three in the fourth quarter but held firm for an impressive victory. 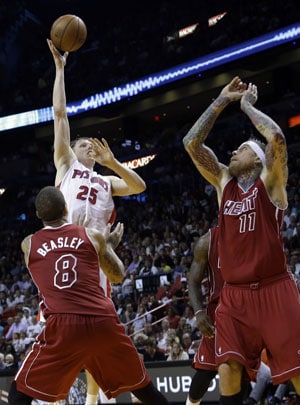 Miami's ten-game NBA winning streak came to an end with a 107-97 home-court defeat at the hands of Detroit on Tuesday, with the Pistons having seven players score in double figures as they hung on against a Heat comeback in the fourth quarter.

Among the day's other games, a makeshift Memphis outfit beat Phoenix, Dirk Nowitzki helped Dallas extend its dominance of Charlotte, and Oklahoma City made it eight-straight wins with a narrow victory over slumping Sacramento.

Detroit's Kyle Singler top scored with 18 points in a team effort by the Pistons, who led by 18 points and saw that whittled back to three in the fourth quarter but held firm for an impressive victory.

LeBron James and Michael Beasley each scored 23 for Miami, which was without guard Dwyane Wade, who again was nursing a sore knee.

The Heat shot a season-low 44 percent.

Memphis' Jon Leuer scored a career-high 23 points as the understrength Grizzlies cruised to a 110-91 win over Phoenix.

Ed Davis added 21 points and 12 rebounds for Memphis, which had to deal with injuries to front-line starters Zach Randolph and Marc Gasol.

Like the Pistons, Memphis had seven players finish in double figures and shot 55 percent from the floor to end a run of four successive home defeats.

Dallas' Dirk Nowitzki recovered from a rough start to score 25 points, including 14 in the fourth quarter, guiding the Mavericks to a 89-82 win over Charlotte.

Nowitzki, who was 1 of 10 from the field in the first half, and Monta Ellis took over late after struggling most of the game. They scored the last 19 points to help the Mavericks outscore Charlotte 29-15 in the fourth.

Al Jefferson scored 19 points for the Bobcats, who are 0-10 in Dallas and 1-17 overall against the Mavericks; the worst record in the league for one team against another

Oklahoma City's Kevin Durant had 27 points and 11 rebounds to lead the Thunder to an eighth-straight win, downing Sacramento 97-95.

The Thunder built a 17-point lead early in the fourth, but had to hold off the Kings and Isaiah Thomas, who scored 21 of his 24 points in the final period and missed a jumper with 1 second left that would have sent the game to overtime.

Russell Westbrook had 15 points for the Thunder, who have won 13 of the past 14 against the Kings.

Golden State's Klay Thompson made four 3-pointers in the fourth quarter to fuel an improbable comeback as the Warriors came from 27 points down in the second half to beat Toronto 112-103.

Denver's Timofey Mozgov had 17 points and a career-high 20 rebounds in another superb effort by Denver's bench, and the Nuggets raced by Brooklyn 111-87 for their seventh straight victory.

Philadelphia's Michael Carter-Williams had 27 points, 12 rebounds and 10 assists for his first career triple-double, and Thaddeus Young added 25 points and 12 rebounds to lead the 76ers past Orlando 126-125 in double-overtime.

Comments
Topics mentioned in this article
NBA Kyle Singler Detroit Pistons Miami Heat
Get the latest updates on India vs Australia Series, check out the India vs Australia Schedule for 2020-21 and Ind vs Aus live score . Like us on Facebook or follow us on Twitter for more sports updates. You can also download the NDTV Cricket app for Android or iOS.