The revitalized Los Angeles Lakers ran past the Houston Rockets 119-108 on Sunday for their fourth victory in five games since firing coach Mike Brown. 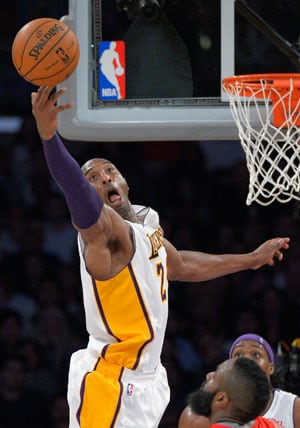 The revitalized Los Angeles Lakers ran past the Houston Rockets 119-108 on Sunday for their fourth victory in five games since firing coach Mike Brown.

Kobe Bryant had 22 points, 11 rebounds and 11 assists for his 18th career triple-double, Dwight Howard had 28 points and 13 rebounds, and Pau Gasol scored his 15,000th career point as the Lakers ran away from their second straight opponent since coach Mike D'Antoni took over their practices.

Chandler Parsons scored 24 and James Harden 20 for the Rockets, who have lost six of eight.

Russell Westbrook had 30 points and Kevin Martin scored 23 for Oklahoma City, while Stephen Curry led the Warriors with 22 points and David Lee had 19 points and 10 rebounds.

Carmelo Anthony had 26 points and nine rebounds to help the New York Knicks back from its first loss of the season with an 88-76 victory over the Indiana Pacers.

JR Smith added 13 points and Raymond Felton had 11 for the Knicks in their only home appearance over a span of seven games.

The Nets (6-2) matched the team's best start since the 2002-03 season when they went to the NBA finals, losing to San Antonio in six games.

DeMarcus Cousins had 29 points for the Kings, who have dropped five straight.

The Toronto Raptors beat the slumping Orlando Magic 97-86 with 20 points from DeMar DeRozan and 14 from Amir Johnson.

Evan Turner had 19 points and nine assists to lead the Philadelphia 76ers over the reeling Cleveland Cavaliers 86-79, while the Detroit Pistons used 20 points and 13 rebounds from Greg Monroe in a 103-83 win over the Boston Celtics.

At Portland, Oregon, Wesley Matthews and Nicolas Batum scored 21 points each as the Portland Trail Blazers beat the Chicago Bulls 102-94.

Comments
Topics mentioned in this article
NBA Blake Griffin Chris Paul MS Dhoni Kobe Bryant Rafael Nadal Tiger Woods
Get the latest Cricket news, check out the India cricket schedule, Cricket live score . Like us on Facebook or follow us on Twitter for more sports updates. You can also download the NDTV Cricket app for Android or iOS.