Shabeer Bapu scored 13 points for U Mumba and Anup Kumar contributed 8 points. Rishank Devadiga scored 14 points for UP Yoddha but it wasn't enough. 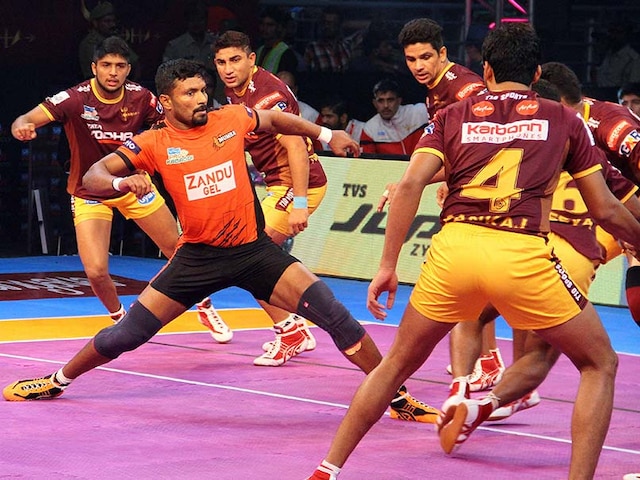 U Mumba survived some tense moments to beat UP Yoddha 37-34 in a thrilling match of the fifth Pro Kabaddi League (PKL) on Friday while in the day's other match Jaipur Pink Panthers edged out Bengaluru Bulls 30-28. Shabeer Bapu scored 13 points for U Mumba and Anup Kumar contributed 8 points. Rishank Devadiga scored 14 points for UP Yoddha but it wasn't enough. Jasveer Singh starred for the Jaipur team, collecting 10 raid points while Manjeet Chhillar was a rock in defence, grabbing eight tackle points, the most in the game.

UP Yoddha got off to a flying start as Devadiga came up with a super raid in the second minute to lead 4-0. Anup got U Mumba going with a raid point in the third minute. But UP Yoddha led 6-3 after minutes as they looked to assert their dominance over U Mumba.

An all out was inflicted on U Mumba in the 9th minute as they railed 4-12. Anup then scored another raid point in the 10th minute for U Mumba.

However, UP Yoddha continued to lead 15-8 as Devadiga had six raid points. Shabeer scored two points in the 20th minute for U Mumba. Anup Kumar also had four raid points as they reduced the margin to 12-15 at the break.

U Mumba began the second half strongly, inflicting an all out in the first minute to level the game at 16-16. U Mumba then stretched the lead to 19-17 in the 22nd minute as they sent Nitin Tomar to the bench.

Devadiga scored two points to turn the tables, handing a slender 20-19 lead to UP Yoddha.

Devadiga scored three points in the 26th minute as UP Yoddha further led 23-22. Darshan Kadian responded with a two-point raid in the next minute for U Mumba. But UP Yoddha inflicted the second all out in the 30th minute to lead 29-26.

Shabeer scored his 11th point of the match in the 32nd minute as U Mumba trailed 28-31. Kadian then produced another two-point raid in the 34th minute to help U Mumba level the match at 31-31.

With less than five minutes to go, U Mumba inflicted their second all out to lead 35-31. UP Yoddha cut the deficit to two points after 37 minutes. But U Mumba kept their nerve in the last two minutes of the match to have the last laugh.