Puneri Paltan ended their 2016 Pro-Kabaddi league with a comfortable 31-27 win over Bengal Warriors to finish in third position. 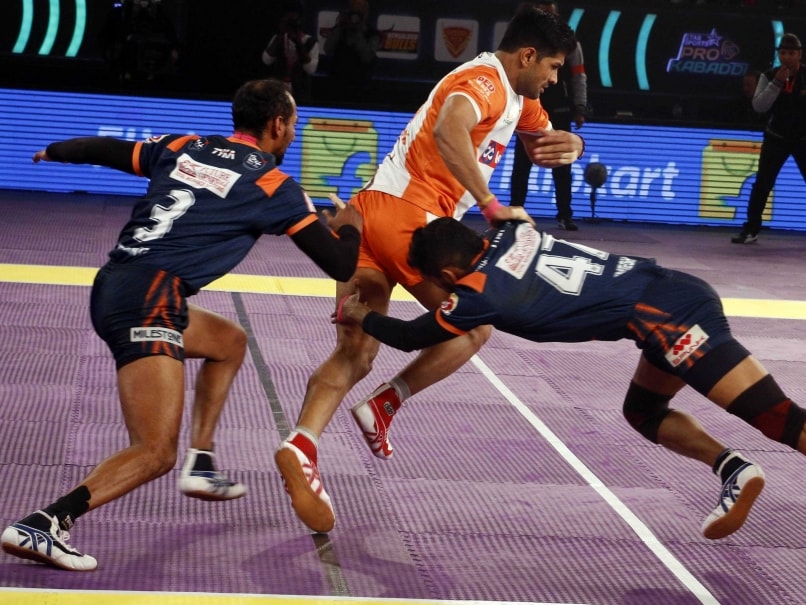 Puneri Paltan finished third in the 2016 Pro-Kabaddi League with a win over Bengal Warriors.© NDTV

Puneri Paltan notched up a comfortable 31-27 win over Bengal Warriors to finish at the third spot in the third season of the Pro Kabaddi League (PKL). (Latest Sports News)

The Paltans laid the foundation in the first half with a 15-8 lead and had to repel a late surge from their rivals who were without their star raider Nitin Tomar, Mahendra Goud and their formidable left corner Girish Ernak.

Despite being below strength, the Bengal Warriors fought on gamely. Jang Kun Lee and skipper Nilesh Shinde raised their game to pump life in the match.

Bengal Warriors made a sedate start to the match going 4-0 up with Mahendra Rajput coming successful from two do or die raids and the Pune raiders' Surendra Singh and Ajay Thakur falling to Umesh Mhatre and Bajirao Hodage in rival territory.

But once Jang Kun Lee got super-tackled by Manjeet Chhillar, Puneri Paltan were in business. Deepak Niwas Hooda with four raid points and Manjeet Chhillar adding three more points with one raid point, the side from Western India got their rivals all-out by the 16th minute.

The second half saw Deepak Hooda continue his good work. Though he was super tackled twice in this half he did enough damage to his rivals. The Puneri Paltan defence also did not lag behind. Led By Manjeet Chhillar they inflicted the second all-out in the 27th minute to lead 22-11.

But Bengal Warriors came back hard. Jang had a super raid and every time he went in he posed problems for the rival defence. He also affected one tackle to push the rivals back.

He had as many as seven points in that ten minute spell that started in the 29th minute. But a two pointer by Deepak Niwas Hooda gave that vital cushion for Puneri Paltan to come close to their objective. At 29-24 the match was sealed.

Comments
Topics mentioned in this article
Other Sports Kabaddi
Get the latest updates on ICC T20 Worldcup 2022 and CWG 2022 check out the Schedule, Live Score and Medals Tally. Like us on Facebook or follow us on Twitter for more sports updates. You can also download the NDTV Cricket app for Android or iOS.