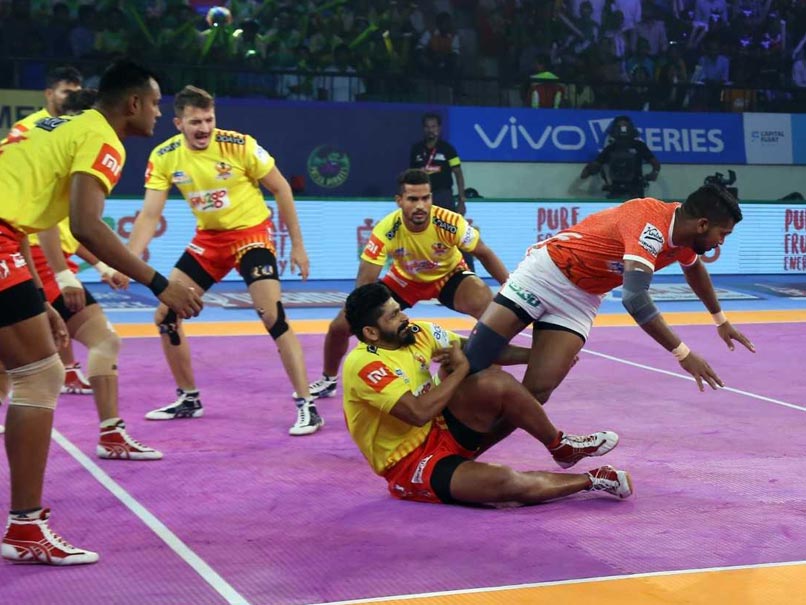 Gujarat Fortunegiants beat Puneri Paltan 37-26 to register their third win of the sixth edition of the Pro Kabaddi League on Tuesday. Nitin Tomar finally achieved his 100th raid point in the sixth season only to leave the match with an injury towards the end. Sachin constantly created a nuisance for Pune as he inflicted an all out in the dying moments of the game to get his Super-10. Parvesh tried his best to help his team to make a comeback, but in vain. Ruturaj Koravi made the lives of Pune's raiders tough with four out six successful tackles. In the other match of the night, Telugu Titans thrashed Patna Pirates 53-32 to register their fourth win of the tournament.

The Gujarat Fortunegiants and Puneri Paltan match started with both teams analysing the match cautiously through empty raids before Sachin got a touch point to make it 1-0 for Gujarat.

Nitin Tomar made a great start for his team as he got two points in his third minute raid to make it 4-2 for Puneri Paltan.

Rinku Narwal made an early mistake by letting Sachin out of his grasp but then made two great tackles on Ajay Kumar and Mahendra Rajput to redeem himself.

The 13th minute unsuccessful raid by Nitin Tomar triggered the downfall of Pune in the first half as the scoreline read 8-10.

His absence led to the team being all out in the 15th minute even though Parvesh tried his best with a bonus point.

The first half saw Gujarat Fortunegiants lead 16-12. With a four point deficit, Puneri Paltan had to make changes in their game plan but Gujarat continued to increase their lead.

Ruturaj Koravi made a great block on Monu from where the team pulled him back in the 23rd minute of the match from the mid-line.

A similar effort was made by Pune on Mahendra Rajput in the 25th minute by Parvesh and Akshay Jadhav for a Super Tackle.

By the 34th minute, Pune had reduced the gap to two points with Rinku Narwal getting a great thigh hold on K Prapanjan.

This match also saw Nitin Tomar become the first raider to reach 100 raid points before getting injured in the 35th minute.

Mahendra Rajput made a great Super Raid and got Sandeep Narwal, Akshay Jadhav and Rinku Narwal out of the equation for some time.

This restored the lead back for Gujarat to 6 points with score reading 23-29. Parvesh tried his best to become the super-sub for Pune but Sachin constantly bothered the defence to get a Super 10. The match ended with Gujarat winning the match 27-36.