Maintaining their stronghold over Bengal Warriors, U Mumba handed their opponents ninth loss in 10 matches with a 37-31 thrashing. 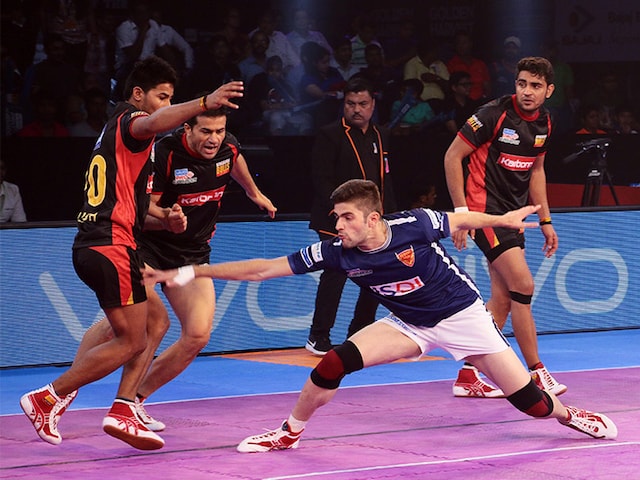 U Mumba and Dabang Delhi KC overpowered their respective opponents to secure fine wins in the Pro-Kabaddi League's second Inter Zone Challenge Week at the Netaji Indoor Stadium, on Wednesday. Maintaining their stronghold over Bengal Warriors, U Mumba handed their opponents ninth loss in 10 matches with a 37-31 thrashing. This was a hat-trick of wins for the Mumbai outfit who boosted their campaign after suffering as many defeats at home in a four match losing streak.

Leading by a narrow 15-12 at the break, Anup Kumar (11 points), Shrikant Jadhav (8) and Kashiling Adake (8) combined with a superlative show to take them to second place in Zone A with 34 points from 12 matches, nine less than leaders Gujarat Fortunegiants.

In a topsy-turvy first half, Delhi first led 6-1 but Rohit Kumar led from the front with a four-point raid to give his side a 18-12 lead at the break.

It is Delhi's second win on the trot and fourth overall but they remained at the bottom of Zone A with 24 points from nine matches.

Bengaluru Bulls who are on fourth place have now 23 points from 11 matches as their slide looks imminent now.

Bulls began the second-half on a bright note with their man-in-form Rohit bringing up his sixth Super 10 of the season with a bonus in the 26th minute to stretch their lead to 23-19.

But Delhi fought back with their captain Sheykh's fearless raids as his three-point raid with 13 minutes remaining brought both the teams on an even keel (23-23).

The Delhi captain made a super 10 raid to consolidate the lead, taking the score to 29-24.

Sheykh came up with a stupendous effort, inflicted a second allout in the last half to give his side a commanding 33-25 advantage as it was a one-way traffic from thereon.

Bengaluru Bulls have been struggling to find form lately as their captain Rohit Kumar has been the only consistent bright spark of their campaign this season.

Dabang Delhi KC who have been looking good lately under Iranian Sheykh.

The Bulls have had some good performances by Mahender Singh and Gurvinder Singh in recent games but they still have not found players to consistently support Rohit.