Bengal Warriors moved to the top spot in Zone B with this win while Jaipur continued to languish at the bottom of Zone B. 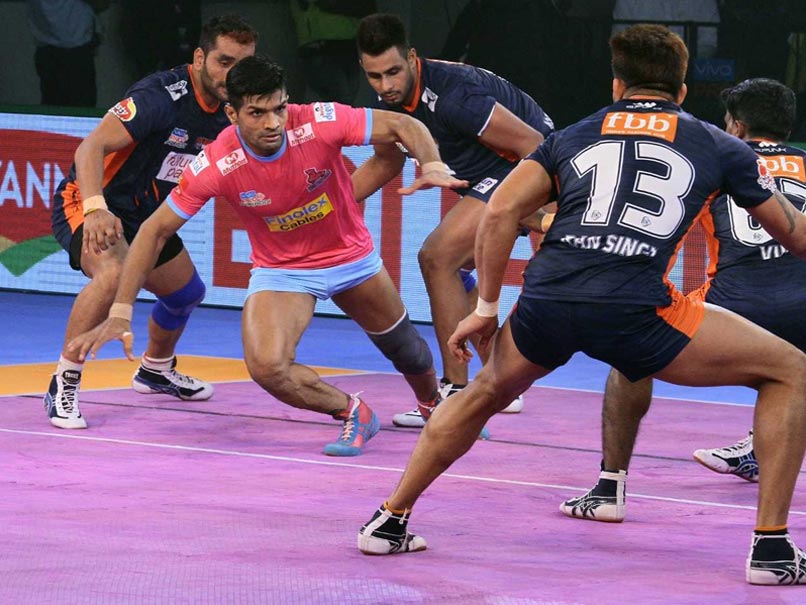 Bengal Warriors registered another win in the Pro Kabaddi League Season 6, defeating Jaipur Pink Panthers 39-28 to continue their splendid run of games with a winning streak of three games now. Jaipur, on the other hand were handed their third straight loss in the season. In another match at the Patliputra Sports Complex, Patna, U Mumba registered a narrow 40-39 victory against Patna Pirates on Saturday. Mahesh Goud and Maninder Singh ran sack points on Jaipur's defence while Ran Singh and the captain Surjeet Singh had a great match. Deepak Hooda tried his best to save the game for Jaipur but in vain as others failed to perform.

Bengal Warriors moved to the top spot in Zone B with this win while Jaipur continued to languish at the bottom of Zone B.

Deepak Niwas Hooda got a running hand touch on Mahesh Goud in the 2nd minute to initiate the points for the match as both teams started with empty raids.

Mahesh made a great comeback to this with a Super Raid in the 7th minute. He made a great review as he was initially given out by the referees only to be overturned into 3 touch points and a bonus point which led to the score reading 7-3.

A strong dash on Anup Kumar by Surjeet made the Jaipur fans nervous as he looked like having an issue with his shoulder in the 9th minute while they were trailing 3-9 to Bengal Warriors.

This led to the first collapse of the day for Jaipur as they were all out by Maninder by the 11th minute.

Jaipur tried to make a comeback with some great raids like the one by Ajinkya Pawar with a great Running Hand Touch on captain Surjeet which led to Bengal being reduced to 3 men on the court by half time as the score read 18-13 in favour of Bengal Warriors.

The second half started with many empty raids as Anup tried to force Bengal Warriors into raiding in Do-or-Die raid and were successful in it as they got Jang Kun Lee in the 23rd minute to reduce the gap to 14-18.

But the next raid saw Vijin and Adarsh make a great Super Tackle on Deepak Niwas Hooda.

Surjeet then made a great super tackle on Ajinkya Pawar's Do-or-Die raid in the 24th minute to widen the gap back to 22-14 for Bengal.

The game went completely out of Jaipur's hands with Maninder making a super raid taking Anup, Sunil and Sandeep Dhull out of the court with a bonus as the cherry on top in the 25th minute to make it a 11 point lead of 25-14.

Mohit Chhillar tried to make something out of nothing with his Super Tackle on Maninder with his double ankle hold. This didn't help them much as they conceded another All Out in the 32nd minute with Ran Singh making a great block
on Ajit Singh.

The game continued to sway towards Bengal Warriors as Ran and Surjeet continued to rack up tackle points on Jaipur's raiders and Jang Kun Lee continued to get crucial points and eventually ending it at 39-28.