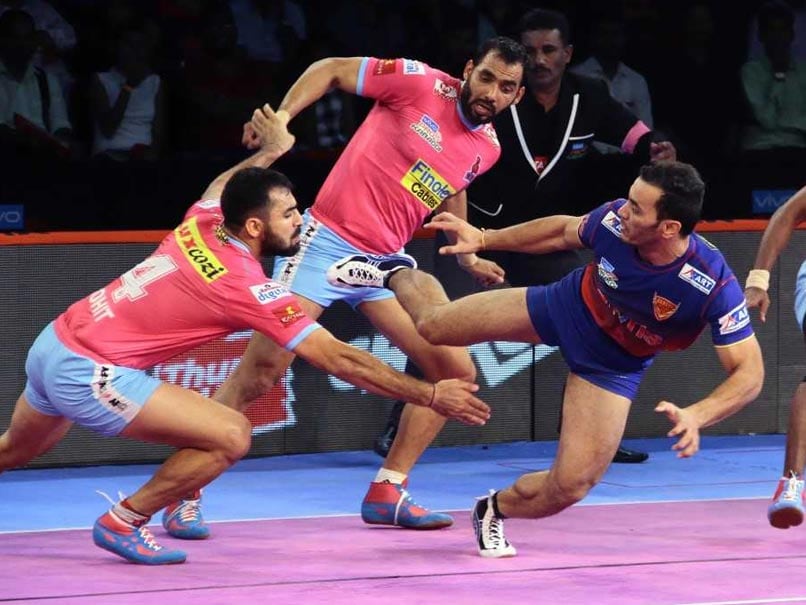 Jaipur Pink Panthers suffered their seventh loss in the ongoing season of Pro Kabaddi League (PKL) as Dabang Delhi hammered the Anup Kumar-led side 40-29 in a zone A clash at the NSCI stadium here on Sunday. In another match, Haryana Steelers defeated U Mumba 35-21 in a Zone A match. Deepak Niwas Hooda's 15 raid points went in vain as Delhi rode collective efforts of Naveen Kumar (10 points), Chandran Ranjit (Eight points) and Meraj Sheykh (Nine points) to register their fourth win this season.

Jaipur were off to a fine start after taking a 3-0 lead in the initial three minutes before Chandran Ranjit's successful raids and some failed attempts by Anup saw Delhi cutting the deficit to one point as the score read 4-3.

A few more successful tackles by Jaipur led them to stretch their lead to nine points, while Delhi was still at three.

Delhi took a couple of points in the next few minutes and this was the turning point of the game as they collected another five points to tie the issue at 10-10 in the 14th minute.

Meraj, Ranjit and Naveen's successful raid attempts saw Delhi taking a 19-13 lead but Deepak came for rescue for Jaipur as they cut the deficit to four points with the score reading 20-16 in Delhi's favour at half-time.

Delhi continued with their fine form in the second-half too and they took a 25-19 lead over their opponents by the 25th minute.

The collective efforts of Meraj, Ranjit and Naveen later helped Delhi to take an unassailable 39-27 lead with less than two minutes to go.

Jaipur managed to bag two points in the dying moments which was not enough to stop them from succumbing to yet another defeat in the current season as Delhi clinched the contest 40-29.

Comments
Topics mentioned in this article
Kabaddi
Get the latest updates on IND vs NZ 2021, check out the Schedule and Live Score . Like us on Facebook or follow us on Twitter for more sports updates. You can also download the NDTV Cricket app for Android or iOS.