Ajay Thakur scored nine touch points for his side while Mohit Chhillar led the defence with a High 5 and was ably supported by Manjeet Chhillar. 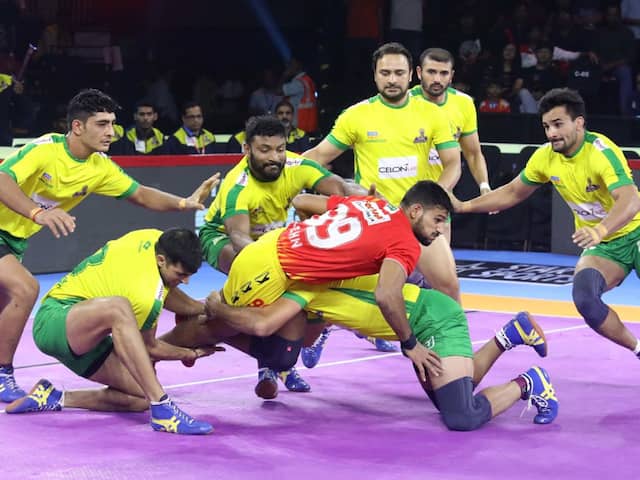 Tamil Thalaivas' defenders were on song on Saturday as they beat Gujarat Fortunegiants.© PKL

Skipper Ajay Thakur led from the front as Tamil Thalaivas defeated Gujarat Fortunegiants 34-28 at the EKA Arena by TransStadia in Ahmedabad on Saturday. In the other match, Dabang Delhi defeated Puneri Paltan 32-30 in a close contest as Naveen Kumar scored his 4th consecutive Super 10 in PKL 7 and his 5th in PKL 7. Ajay Thakur scored nine touch points for his side while Mohit Chhillar led the defence with a High 5 and was ably supported by Manjeet Chhillar who scored four tackle points. Sunil Kumar scored a High 5 for Gujarat Fortunegiants but was unable to keep Tamil Thalaivas from clinching victory in the closing minutes.

Gujarat Fortunegiants got off to a 4-1 lead through their raiders Sachin and Harmanjit Singh. But 'Iceman' Ajay Thakur got a touch point on his counterpart Sachin Kumar which kick-started a successful run for Tamil Thalaivas, ultimately ending in them levelling the scores at 5-5 in the 10th minute.

Thakur was the star of the half for his side, having scored six of those points.

The second half started with Gujarat Fortunegiants getting the first point through Rohit Gulia. But a successful tackle followed by a successful raid from Rahul Chaudhari kept Tamil Thalaivas' noses ahead in the contest.

Down to three men, Tamil Thalaivas first lost Rahul Chaudhari to Sumit's Back Hold before conceding the All-Out in the 16th minute, giving the home team a one-point advantage.

As soon as Tamil Thalaivas reassembled on the mat, though, Manjeet started things off with a brilliant tackle on Gulia before Thakur managed to escape a chain tackle to pick up a Super Raid and give his team a big advantage with just over two minutes left on the clock.

Mohit Chhillar then completed his High 5 by tackling Sonu, opening the doors for another Gujarat Fortunegiants All-Out with just seconds left in the contest.

Gulia managed a two-point raid in that period to help the home team get a point from the contest, but it was Tamil Thalaivas who walked away with victory.