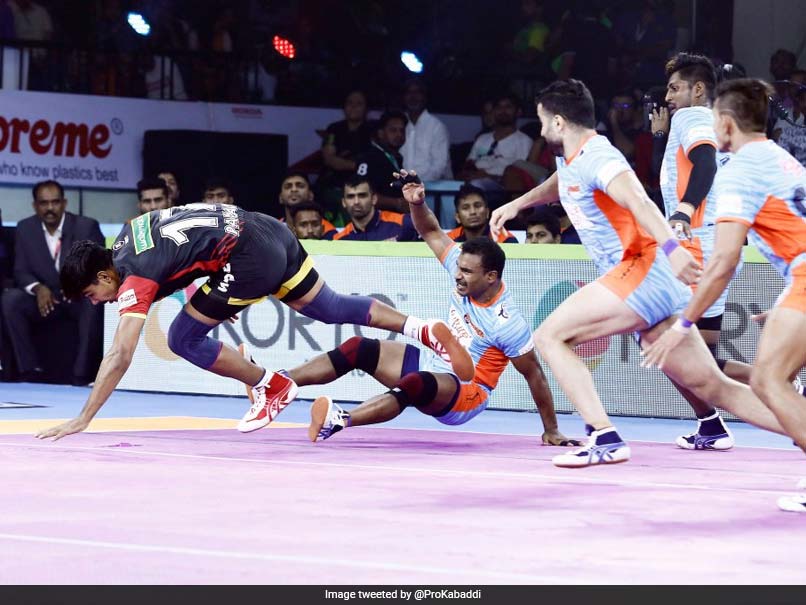 Jaipur Pink Panthers notched up an impressive 34-21 over Patna Pirates in Pro Kabaddi season 7. Jaipur Pink Panthers' defence led by Sandeep Dhull and Amit Hooda did an excellent job on Patna's danger man Pardeep Narwal as they kept him off the mat for 23 minutes 9 seconds. Narwal to his credit managed to top score for Patna and ended with 9 points. Sandeep Dhull put in a strong defensive performance and got as many as 8 tackle points. Deepak Narwal chipped in with 8 raid points for Jaipur Pink Panthers. For Patna Pirates, Monu who came on as a substitute ended up with a high five.

The second half begun with Jaipur Pink Panthers asserting their dominance. Deepak Narwal made a two-point raid in the 23rd minute to lead 18-11. Pardeep Narwal scored three quick raid points to revive Patna's hopes of a comeback as Patna Pirates trailed 14-18 after 26 minutes. Amit Hooda completed his high five in the 27th minute as he sent Pardeep Narwal to the bench and crushed all hopes of a Patna Pirates comeback.

In the 30th minute Deepak Narwal made a two-point raid to give Jaipur Pink Panthers 24-14 lead. Sandeep Dhull also achieved a high five in the 33rd minute as Jaipur Pink Panthers continued to pile more misery on Patna Pirates. Jaipur then inflicted another all out to lead 29-16.

Pardeep Narwal was the lone ranger when it came to Patna's raiding points as with just five minutes to go they still trailed by 10 points.

Fans can catch all the action of Pro Kabaddi Season 7 from 7 p.m. onwards on Star Sports Network and Hotstar.