Dilshan led Sri Lanka in 11 tests, with one win, five draws and five losses. The highlight of his captaincy was leading his team to its first win against South Africa in South Africa. 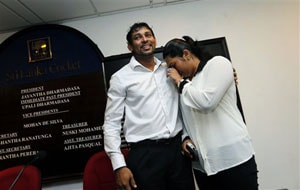 Ex-Sri Lanka captain Tillakaratne Dilshan announced his retirement from test cricket with immediate effect on Thursday, saying he wants to clear the way for younger players.

Dilshan, who will turn 37 next week, told reporters that he had planned to retire after a series against Zimbabwe this month but the cancellation of that tour means he will depart without a farewell match.

"It's a good time to go. I have done well in my last series with an average of 60," Dilshan said of his last series against Bangladesh. Dilshan said he is leaving happy, having accomplished his personal target of 5,000 test runs and captaining the team.

Dilshan led Sri Lanka in 11 tests, with one win, five draws and five losses. The highlight of his captaincy was leading his team to its first win against South Africa in South Africa.

"I started (tests) in Zimbabwe in 1999 and planned to retire in Zimbabwe. Unfortunately we don't have any test matches in Sri Lanka until 2015 and that's why I decided to retire without saying goodbye from the ground," he said.

Dilshan played 87 test matches during a 14-year career, and his 5,492 runs included 16 centuries at an average of almost 41. A versatile cricketer, Dilshan has also picked by 39 wickets with his part-time off spin bowling and kept wickets.

His aggressive batting with a strike-rate of more than 65 has helped Sri Lanka take early advantage in test matches.

He will continue to play limited-overs internationals and Twenty20s for Sri Lanka and in Twenty20 leagues.