Australian Simon Taufel and Pakistan's Aleem Dar, who officiated in the World Cup final between India and Sri Lanka last week, were on Thursday named among 17 on-field umpires for the fourth edition of the Indian Premier League commencing on Friday at Chennai. 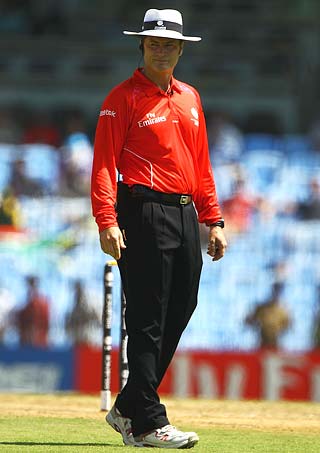 Australian Simon Taufel and Pakistan's Aleem Dar, who officiated in the World Cup final between India and Sri Lanka last week, were on Thursday named among 17 on-field umpires for the fourth edition of the Indian Premier League commencing on Friday at Chennai.

Seven umpires from across the country, including Amish Saheba and Shavir Tarapore have also got a call from IPL administrators to officiate in the seven week-long Twenty20 tournament, starting with the clash between defending champions Chennai Super Kings, led by India skipper Mahendra Singh Dhoni and Kolkata Knight Riders, captained by Gautam Gambhir.

Roshan Mahanama, Javagal Srinath and Andy Pycroft along with three others have been named as match referees while fourth umpire panel consists of 10 officials.

Meanwhile, Kingfisher Airlines will again be the official Umpire Partner for the fourth edition of the tournament.

"We are happy with the continued partnership with Kingfisher Airlines for IPL 2011," said Chirayu Amin, IPL commissioner.

Highlighting the vital role which match officials play in international cricket, IPL team Royal Challengers Bangalore (RCB) owner and chairman and managing director of Kingfisher Airlines, Vijay Mallya said that his company's involvement in the tournament would be reflected by a number of prominent activities, including the Fly Kingfisher 'Fair Play Award'.

This prize, which has been given annually since the IPL's inception, will again be presented to the team judged by the umpires to have played the game in the fairest spirit throughout the season.

Umpires will be given criteria by which to judge teams. Reigning champions, Chennai Super Kings, capped the Fly Kingfisher Fair Play Award last year and in 2008, with Kings XI Punjab winning it in 2009.

"We are delighted to continue our partnership with the Indian Premier League as the official Umpire Partner. As officiators of the game, umpires are not just an integral part of cricket, but also the universal symbol of order and fair play in the field," said Mallya.

"The IPL is an innovative concept and has carved out a distinct position for itself in the international cricket calendar. We have planned a range of exciting promotions taking place throughout the league that will allow our guests to experience the excitement that the IPL has to offer this season," he added.

The list of umpires and match referees for IPL 2011 is as follows:

Comments
Topics mentioned in this article
Cricket Indian Premier League 2011 Simon James Arnold Taufel
Get the latest updates on IPL 2021, check out the IPL 2021 Schedule and Indian Premier League Live Score . Like us on Facebook or follow us on Twitter for more sports updates. You can also download the NDTV Cricket app for Android or iOS.