Sun warms up Dharamsala ahead of India-England ODI

The cricket fans were in dilemma after former England captain Paul Collingwood tweeted Wednesday before the fourth ODI in Mohali in Punjab: "Think I'll need my snow suit for Dharamsala," he said. 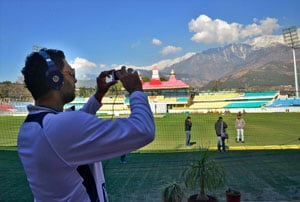 A sunny Saturday warmed up the hearts of cricket lovers a day ahead of the fifth and final one-day international (ODI) between India and England in this abode of the Dalai Lama.

"While seeing snow on surrounding mountains give an impression that it is chilly, the weather is quite tolerable and fit for the game," he added.

The weather office in Shimla said Dharamsala saw a low of 5.2 degrees Celsius Saturday, whereas the day's temperature was comparatively warm at 18.6 degrees.

Another Briton, Mark Wilson, said he had been apprehensive about the chill.

"We were told that only last week it snowed in the hills (of Dharamsala). I carried extra woollens but here the sun is smiling at you," he said.

The cricket fans were in dilemma after former England captain Paul Collingwood tweeted Wednesday before the fourth ODI in Mohali in Punjab: "Think I'll need my snow suit for Dharamsala."

The Himachal Pradesh Cricket Association (HPCA) is sparing no effort to make the ODI a warm and welcoming affair at its new showpiece venue, at an altitude of 4,000 feet above sea level.

"The stadium and pitch are ready for the big event," HPCA president Anurag Thakur, a MP, told IANS.

He said the HPCA had been preparing for the match since the International Cricket Council (ICC) gave its clearance to HPCA in January last year for hosting one-day international (ODI) and Twenty20 matches.

"The setting and outlook of this venue is outstanding, being located in the shadow of the Himalayan mountains, making it one of the most unique in the cricketing world," Boon had said in a report.

HPCA officials said the stadium's popularity soared with the hosting of seven IPL matches in the past three IPL seasons.

It also has an indoor stadium comprising video analysis facilities for both bowlers and players, a club lounge, restaurant, bar and banquet hall.

Comments
Topics mentioned in this article
Cricket India vs England 2012 BCCI Owais Shah Paul Collingwood Himachal Pradesh Cricket Association Stadium, Dharamsala Indian Premier League 2011
Get the latest Cricket news, check out the India cricket schedule, Cricket live score . Like us on Facebook or follow us on Twitter for more sports updates. You can also download the NDTV Cricket app for Android or iOS.