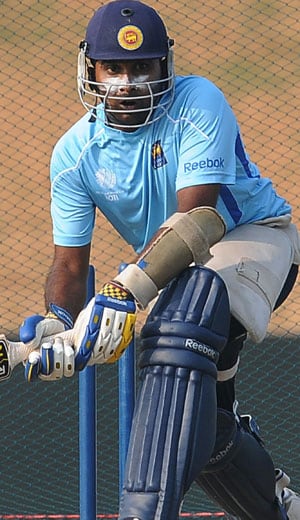 The 34-year-old batsman hit a half century in his team's 26-run defeat in the fourth match in Sharjah on Sunday, but played in some discomfort after injuring his knee.

Tennekoon said Jayawardene has returned home to regain fitness ahead of next month's tour of South Africa.

"After Sunday's game Mahela's injury got worse so he has returned home," Tennekoon told AFP. "Chamara Silva was brought in as cover."

Pakistan has an unassailable 3-1 lead in the one-day series with the fifth and final match to be played on Wednesday.

The 31-year old Silva has played 11 Tests and 74 one-day internationals for Sri Lanka.

Tennekoon said captain Tillakaratne Dilshan was okay after hurting his left thumb and if it does not get worse he will be available to play in the Twenty20 match between the two teams on Friday.

"Dilshan is okay and will play in the fifth one-day," said the team manager.

Pakistan captain Misbah-ul Haq said his team will put everything into the final match.

"We have to go all-out and win the last game as well and finish the series on a high," said Misbah, whose team will go fifth in the ICC (International Cricket Council) one-day rankings if they win the series 4-1.