Elated at Sourav Ganguly's comeback to IPL, the former Team India skipper's wife Dona feels if a player can keep himself fit and perform, he should be allowed to continue in the game. 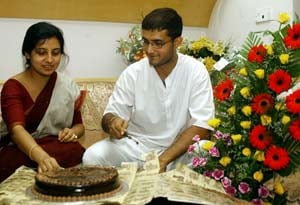 Elated at Sourav Ganguly's comeback to IPL, the former Team India skipper's wife Dona feels if a player can keep himself fit and perform, he should be allowed to continue in the game.

"Just because my students are dancing, it does not mean that I stop performing. If you can keep yourself fit and can perform, then why not?'' Dona, an Odissi dancer, told PTI.

"When Sachin is scoring a hundred after hundred, will it be right if he is stopped from playing?'' she said.

Dona said Sourav quit the national team on his own accord and because he felt like that. The family was sad when Sourav was not picked up initially by any IPL franchise.

''It is nice that he got an opportunity now. Players like him should have their own time of declaring when they don't want to play. He should play if he wants to," she said.

Sourav Ganguly has made an entry into IPL 4, with Pune Warriors announcing on May three that it had signed him on in place of the injured Ashish Nehra.

The icon of Kolkata Knight Riders in the first three seasons, Ganguly found himself out of the fourth edition as no franchise bid for him in the auctions earlier this year and later took to commentary.

He is likely to take the field on Sunday when the Pune Warriors lock horns with Kings XI Punjab.

Asked which team, she would support now that her husband has joined Pune Warriors, Dona, an accomplished Odissi dancer, said, ''I will be among many fans in Kolkata who will be supporting Pune Warriors.''

Dona was here to perform at a four-day festival to mark Rabindranath Tagore's sesquicentenary birth anniversary.

Comments
Topics mentioned in this article
Pune Warriors India Kolkata Knight Riders Sourav Ganguly Cricket Indian Premier League 2011
Get the latest updates on ICC Women's Cricket World Cup 2022 and IPL 2022, check out the Schedule , Live Score and IPL Points Table. Like us on Facebook or follow us on Twitter for more sports updates. You can also download the NDTV Cricket app for Android or iOS.