Latin singer Shakira will be seen dancing with Shah Rukh Khan in a music video for his Kolkata Knight Riders team. 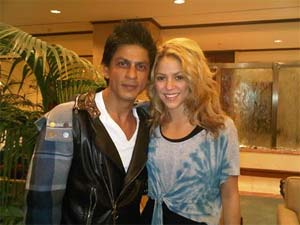 Latin singer Shakira will be seen dancing with Shah Rukh Khan in a music video for his Kolkata Knight Riders team.

The pop sensation, who did the Waka Waka song for the FIFA World Cup last year, will feature with the Bollywood star in the song that is composed by Salim-Sulaiman and sung by Rahat Fateh Ali Khan.

According to reports, the video will be shot after SRK completes his schedule for Don 2, currently being shot in Malaysia.

The two superstars met during the Football World Cup in South Africa in 2010.

Comments
Topics mentioned in this article
Indian Premier League 2011 Sourav Ganguly Shah Rukh Khan Barcelona Ajaysinhji D. Jadeja Shoaib Akhtar Kolkata Knight Riders Cricket
Get the latest updates on India vs South Africa and check out  Schedule, Results and Live Score. Like us on Facebook or follow us on Twitter for more sports updates. You can also download the NDTV Cricket app for Android or iOS.