Cheteshwar Pujara's father hopes his son won't endure the same injury frustration like in 2009 IPL. Arvind Pujara hasn't seen his son since Cheteshwar injured his knee while attempting to save a boundary for the Royal Challengers Bangalore on Sunday. 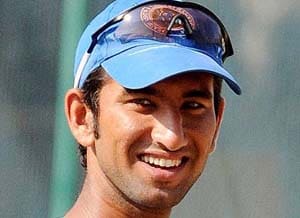 Arvind Pujara hasn't seen his son since Cheteshwar injured his knee while attempting to save a boundary for the Royal Challengers Bangalore on Sunday.

The rest of the team have travelled to Jaipur for their match against Rajasthan Royals.

Cheteshwar was ruled out of competitive cricket for six months when he injured his left knee during a practice tie for Kolkata Knight Riders during the 2009 edition of the Indian Premier League (IPL) in South Africa.

His father is praying that the ghost of 2009 doesn't return to haunt his son just as he was starting to establish his place in India's Test XI ahead of the tours of West Indies and England.

"In 2009, he had to undergo an operation on his ligament after injuring his left knee. That kept him out of action for six to eight months. We are praying that this isn't that severe," the father told MiD DAY from Rajkot.

"That year (in 2009), he was in great form, cracking triple hundreds for his state side. The timing of the injury was wrong. Hopefully, this time he'll recover soon."

Pujara said that the medical reports of his son's injury hadn't arrived yet.

"We will know the exact state of the injury only after 48 hours because when it's an internal injury, it's hard to tell the extent without an MRI scan," he said.

"I am very confident that things will be fine as the best in the business are taking care of him.

"I have heard that his swelling is not that bad, so that's a good sign. However, it's too early to say anything at this stage. We can only pray."

It is learnt that Pujara spoke to Yuvraj Singh on Sunday as the latter had also suffered a knee injury last year.

Pujara was told that his son's injury was different from the one suffered by the Pune Warriors captain, and that the road to recovery would depend on a lot of factors.

It is also learnt that Pujara junior would require a surgery, and could be ruled out for at least three to four months.