Australia and Sri Lanka were searching for the right combination to tackle a bone-dry wicket as they prepared for Wednesday's first cricket Test in Galle. 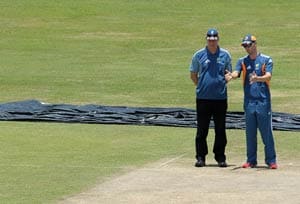 Australia and Sri Lanka were searching for the right combination to tackle a bone-dry wicket as they prepared for Wednesday's first cricket Test in Galle.

"The wicket looks more dry than what we got in previous matches in Galle," said Dilshan, who leads Sri Lanka for the first time in a home series.

"It will be a bit slow and I think it will turn after tea on the first day itself."

Clarke, who begins his reign as a full-time Australian Test captain, also foresaw a trial by spin for his batsmen.

"I hope I win the toss," he said. "It will be harder to bat as the game goes on.

"Our biggest challenge in the series is how we are going to play spin bowling. It is going to be a tough battle."

Clarke's predecessor Ricky Ponting is the only one in the touring party to have played a Test match in Sri Lanka, way back in 2004 when Australia won 3-0.

Australia were debating whether to play both their specialist spinners, Michael Beer and Nathan Lyon, or go in with three fast bowlers in Mitchell Johnson, Ryan Harris and debutant Trent Copeland.

Left-armer Beer, 27, has played in just one Test, while the 23-year-old Lyon was a surprise selection for the tour after just four first-class matches behind him.

Copeland, 25, a lanky seamer from New South Wales, enhanced his claims in the three-day tour match in Colombo last week with a five-wicket haul in the first innings.

Australia will also need to choose between two left-handers, Shaun Marsh and the Pakistan-born Usman Khwaja, for the number six place in their batting line-up. 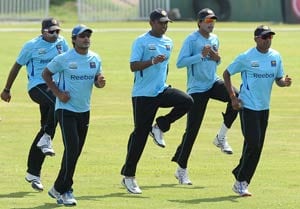 Sri Lanka, meanwhile, left out the rookie duo of seamer Shaminda Eranga and leg-spinner Seekkuge Prasanna in a short-list of 13 players announced on Tuesday.

"There is a good chance of playing three spinners, but I can also bowl a bit of off-spin, so we will see what is best," he said.

If all three play, left-arm bowler Chanaka Welegedera may be the only seamer in the team with all-rounder Angelo Mathews sharing the new ball.

The first Test marks the start of a new chapter for both teams as they look to climb back up the Test rankings.

Former world number one Australia have fallen to fifth place, while Sri Lanka, ranked second just a year ago, are fourth behind leaders England, South Africa and India.

With the top four due to contest the inaugural world Test championship in England in 2013, both teams will hope to push their claims.

A series win for Australia would see them rise to fourth place, but the positions will remain unchanged if Sri Lanka win.

Since the retirement of world bowling record holder Muttiah Muralitharan a year ago, Sri Lanka have failed to win a Test, having lost two and drawn six.

The remaining two Tests will be played in Pallekele (September 8-12) and Colombo (Sept 16-20).