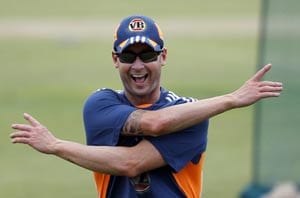 Australia's captain Michael Clarke and test regulars David Warner and Matthew Wade will return to the team for the third and fourth matches in its one-day series against Sri Lanka.

The trio missed the first two matches of the five-match series which is tied after Australia won the opening match by 107 runs and Sri Lanka the second match by five wickets. The third match is in Brisbane on Friday.

"Moises Henriques also comes into the squad as a genuine all-rounder whose bowling will be suited to conditions often found at the Gabba (in Brisbane)," selection chairman John Inverarity said.

"Moises is a young man who has shown promise for some years with both the bat and the ball. This will be an opportunity for him to impress as we look for a good seam bowling all-rounder."

Steve Rixon will take over as head coach for the third match in Brisbane while Mickey Arthur returns to South Africa to spend some time with his family. Arthur will re-join the squad in Sydney on Saturday.

Meanwhile, veteran batsman Tillakartne Dilshan said Sri Lanka was unconcerned about continual changes to Australia's team and did not believe it was facing a second-string side.

"They are looking forward to play the Ashes in a couple of months, they want to try some players. That is why they are rotating their players," Dilshan said.

"The thing is, we know anyone who comes into their side is very tough. A few of the youngsters we see in the Big Bash (Twenty20 league) are bowling really well and they are in good form. That is why the selectors bring them to the national side."

Dilshan said the return of Clarke, Wade and Warner made the Australian team stronger.

"They are great players in the Australian side. They are match-winning players," he said. "It is not easy for us with these three players coming back in the side but still we are looking forward to playing good cricket."