Kerala Cricket Association on Saturday said preparations for the first Indian Premier League encounter between Kochi, making its debut this season, and Royal challengers Bangalore, was almost complete and it was fully geared up to host the five matches of the home team here from April 9. 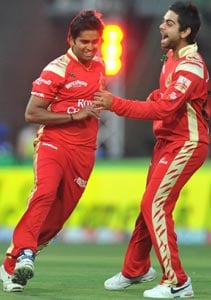 Kerala Cricket Association on Saturday said preparations for the first Indian Premier League encounter between Kochi, making its debut this season, and Royal challengers Bangalore, was almost complete and it was fully geared up to host the five matches of the home team here from April 9.

"We are even prepared to host the two matches now alloted to Indore and we have written a letter in this regard to the BCCI," KCA Secretary T C Mathew told reporters here. On Monday, KCA officials had met the franchisees over a four hour meeting.

All their apprehensions have been cleared. They now want all the seven matches to be held at Kochi, Mathew said. The franchise, which earlier was keen to shift the venue away from Kochi, was yet to sign the tripartite agreement between the KCA-BCCI-Franchise.

"They have not yet signed the agreement. But we are expecting them to sign it soon," he said.

The IPL governing council had dismissed the plea of the franchisees to shift the matches from Kochi, he said.

"We are confident that the matches will be held at Kochi. All facilities are almost ready. The countdown has begun," Mathew said.

The BCCI's Pitches and Grounds Committee chairman Venkata Sundaram, who inspected the ground and the facilities, had opined that the pitch and outfield were "excellent".

Malaysia's Trans Asia International was given the task of preparing the ground and put in a good drainage system.

He said it was confident that the October 17 washout of the India-Australia one-dayer due to heavy rains and water logging of the stadium was a thing of the past.

On the issue over entertainment tax concessions for IPL matches, he said the issue is likely to be settled amicably soon.

The new name of the Kochi IPL team, which will begin its preparatory camp from March 26, will also be announced soon.

The franchisees are expected to be here on March 14 and BCCI's security head R K Das will be visiting the stadium next week.

The KCA has taken the stadium of the Greater Cochin Development Authority on a five year lease.

Comments
Topics mentioned in this article
Sunil Manohar Gavaskar BCCI Deccan Chargers Suresh Raina Indian Premier League 2011 Cricket
Get the latest updates on ICC T20 Worldcup 2022 and CWG 2022 check out the Schedule, Live Score and Medals Tally. Like us on Facebook or follow us on Twitter for more sports updates. You can also download the NDTV Cricket app for Android or iOS.