When asked how the likes of Indian veterans Sachin Tendulkar and Rahul Dravid have been able to carry on for so long, Gloster said it has a lot to do with the positive environment around them. 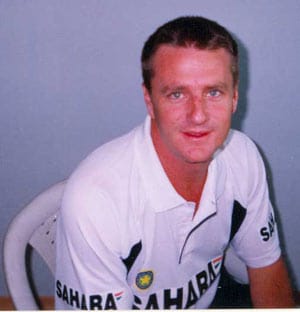 The purists might scoff at it, but renowned physiotherapist John Gloster feels the IPL has helped improve the fitness standard of the Indian cricketers.

"Undoubtedly, the general standard of fitness in Indian cricket has improved tremendously and one of the major reasons is IPL," Gloster told PTI in an interview.

Gloster, who quit as the Indian Team's physio in 2008, is currently associated with IPL franchise Rajasthan Royals, which is competing in the ongoing Champions League Twenty20.

"Rajasthan Royals is the only team which has a regular Physio. It has helped the players. I have become a central point for many players as I am easily available. They keep talking to me and I have helped many of them extend their careers," Gloster said.

"The most important thing is to communicate with me about your injuries. With more cricket around, the injuries are on the rise but one shouldn't hide them instead should tell about them honestly so that they could be cured in time. This way you can also avoid serious or chronic injuries," he said.

Gloster said an important having a healthy mind was the key to having fit body.

"Mental fatigue is more dangerous than physical injuries which can be cured. It is the drive and passion which can override the physical aspect. If stress is there, the levels of 'Cortisal' increases and the threat of injuries also becomes imminent. It is the environment which dictates performance," said Gloster.

When asked how the likes of Indian veterans Sachin Tendulkar and Rahul Dravid have been able to carry on for so long, Gloster said it has a lot to do with the positive environment around them.

"Another factor is that they are enjoying the game and feel they can still contribute to their teams' cause. Their drive and passion keeps them going.

"Rahul is a disciplined person and I mean disciplined in every aspect of life," he added.

Comments
Topics mentioned in this article
Cricket Sachin Ramesh Tendulkar Rahul Dravid Indian Premier League 2011 Rajasthan Royals
Get the latest Cricket news, check out the India cricket schedule, Cricket live score . Like us on Facebook or follow us on Twitter for more sports updates. You can also download the NDTV Cricket app for Android or iOS.