BCCI sources say Sahara Pune Warriors paid 20 per cent of the franchise fee in January and had promised to pay the remaining amount by May 19 but they failed following which the IPL governing council then decided to encash the bank guarantee. 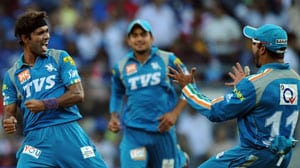 The troubles regarding Indian Premier League doesn't seem to end as Sahara Pune Warriors failed to pay the full franchise fee for the current year which resulted in BCCI encashing the bank guarantee casting a shadow on its future in the cash-rich league in coming years. (Also read: Is Sreesanth a shopaholic?)

"Yes, the BCCI has initiated procedure to encash the bank guarantee that has been deposited in order to procure Pune Warriors' franchise fee for the current year," a senior BCCI official told PTI on Tuesday. (Supreme Court says can't ban Indian Premier League)

Sahara bought Pune franchise for a record Rs 1702 crore for 10 years. But they currently have dispute regarding the reduction of the franchise fee as initially there were 94 matches which was later reduced to 74 matches. The issue hasn't been resolved yet. (Fixing to be criminal offence under new law: Kapil Sibal)

"In January this year, Sahara paid around 20 per cent of the year franchisee fee which is approximately Rs 170 crore. The BCCI was told that they will pay the remaining amount by May 19 but they failed. The IPL governing council then decided to encash the bank guarantee."

However BCCI's decision to go ahead and encash the bank guarantee does raise a question-mark whether the franchise will be a part of the seventh edition of Indian Premier League in 2014. (IPL spot-fixing: Police investigating links between Bollywood, Tollywood)

"It is too early to say what will happen next year but yes things are indeed looking ominous," another senior BCCI official informed.

When BCCI treasurer Ajay Shirke was contacted in order to confirm the amount of bank guarantee, he refused to divulge any information.

This is not the first time that BCCI has encashed bank guarantees after franchises failed to cough up the fees. Kochi Tuskers Kerala and Deccan Chargers were disbanded from IPL after they failed to pay the required fees.

Pune Warriors' performance has not been good in the three seasons of IPL that they have participated in and remained in the bottom rung.