Bollywood actress Preity Zinta, a Mumbaikar and Kings XI Punjab owner, said she had a "big grin on my face" after the win. 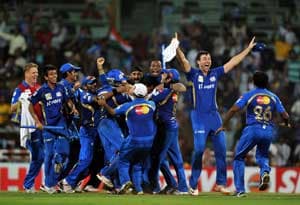 Congratulations kept rolling in as celebs took to Twitter to laud the Mumbai Indians for their triumph in the sixth edition of the Indian Premier League on Sunday.

Bollywood actress Preity Zinta, a Mumbaikar and Kings XI Punjab owner, said she had a "big grin on my face" after the win.

"Congratulations#MI;-) As a Mumbaikar I've got a big grin on my face tonight :-))))) Sorry#Csk but u've won be4 ! Well played Dhoni ! Ting," Preity Zinta wrote.

"CONGRATULATIONS MI on their FIRST EVER win at d IPL!!!:))Well deserved Victory!! MI supporters a moment to remember...UR team was SUPER!!:))"

Industrialist Vijay Mallya, whose side Bangalore Royal Challengers fell by the wayside in the round robin league stage, wrote: "Congrats MI-IPL 6 Champions."

Comments
Topics mentioned in this article
Cricket IPL 2013 Kevin Pietersen Pragyan Ojha Eoin Morgan Kings XI Punjab Mumbai Indians Indian Premier League 2011 Carlton Cole Danny Gabbidon
Get the latest updates on India vs Australia Series, check out the India vs Australia Schedule for 2020-21 and Ind vs Aus live score . Like us on Facebook or follow us on Twitter for more sports updates. You can also download the NDTV Cricket app for Android or iOS.