Australia have the upper hand, courtesy a good show again by their batsmen. 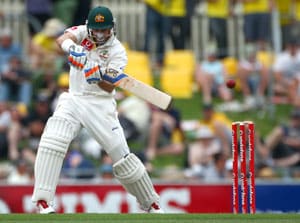 Four Sri Lankan wickets rewarded a Mike Hussey-induced declaration to have Australia in a powerful position after the second day of the first Hobart Test on Saturday.

Veteran Hussey's fifth century in six Tests against Sri Lanka enabled skipper Michael Clarke to call a halt to Australia's first innings at 450 for five off 131 overs, some 30 minutes before tea on a rain-interrupted day.

Clarke's call was backed by his bowlers who captured the wickets of Dimuth Karunaratne and the prized scalps of Kumar Sangakkara, Mahela Jayawardene and Thilan Samaraweera in the final session.

At the close, Sri Lanka were 87 for four with Tillakaratne Dilshan not out 50 with Samaraweera out in the day's final over.

Dilshan reached his 50 off 82 balls when he hooked Shane Watson for four in the penultimate over of the day.

Evergreen Hussey continued to flourish this southern summer with an unbeaten 115 for his 19th Test century and third in the last month to share in a 146-run stand with wicketkeeper Matthew Wade (68).

In his six Tests against Sri Lanka, Hussey has scored five centuries at 109.62.

"I think we're in a fantastic position to get a couple of those late wickets and three in particular were big wickets," Hussey said.

"You get Sangakkara, Jayawardene and Samaraweera out, they are guys that can make big scores and play in tough conditions.

"We've still got a lot of hard work to do, they'll fight very hard the Sri Lankans, they won't be giving anything up easy."

Hussey, batting better than ever at the age of 37, audaciously raised his hundred with a pull off Shaminda Eranga.

Angelo Mathews looked set to take the catch on the mid-wicket boundary ropes but fumbled the chance, allowing the ball to bounce over for four to bring up Hussey's 100.

Hussey's knock came off 184 balls with eight fours and a six.

Wade, who had a life on 20 when he was dropped by fielding substitute Suraj Randiv at mid-wicket off Chanaka Welegedara nearing lunch, raised his second Test half-century.

Clarke was the only Australian wicket to fall out in the day's third over when he edged Eranga to Sangakkara low down at first slip.

The Australian skipper's 74 off 145 balls took his tally to 1,432 runs this calendar year at 102.28 with a possibility of three more Test innings to come before year's end.

Clarke had been on track for his fifth century of 2012, three of them double-centuries, along with his Test highest score of 329 not out against India in Sydney last January.

Sri Lanka began boldly but rookie opener Karunaratne was out for 14 in the 10th over when he nibbled at Ben Hilfenhaus and was snapped up by Wade.

The Australians struck two killer blows late in the day with the key wickets of Sangakkara and Jayawardene.

Sangakkara, who scored 192 in his previous Test innings at Hobart five years ago, went cheaply for four when he sliced Peter Siddle to Hussey's safe hands in the gully to leave the Sri Lankans at 42 for two.

It got worse for the tourists when Watson trapped Jayawardene leg before wicket for 12 in the 23rd over.

Jayawardene, who is relinquishing the team captaincy after the Australian tour, referred the decision to the TV umpire, who upheld the umpire's verdict.

Samaraweera was out in the final over when he was surprised by spinner Nathan Lyon's extra bounce and was caught behind for seven.

The signs were not looking good for Sri Lanka, who were chasing their first Test win in Australia at 11 attempts.

"Losing a wicket at the end of the day is always very tough to handle and it's disappointing and especially as we almost felt we had got through with only three down, so that does hurt," Sri Lanka coach Graham Ford said.

"I'm sure if we can bat well and at the match goes on and the wicket gets a bit older (spinner) Rangana Herath will come more into the game."

Play was extended after a total of 130 minutes were lost to rain in two delays during the day.