From Virender Sehwag's 'upar cut' to Tillakaratne Dilshan's 'dilscoop', former greats, it seems, are in awe of innovations brought about by modern day cricketers. 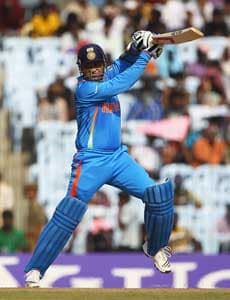 From Virender Sehwag's 'upar cut' to Tillakaratne Dilshan's 'dilscoop', former greats, it seems, are in awe of innovations brought about by modern day cricketers.

Legends like Vivian Richards, Imran Khan and Allan Border were full of appreciation while talking about the innovative shots which are in vogue at the moment.

Richards, while talking about India skipper Mahendra Singh Dhoni's 'helicopter shot', said, "You really have to give him credit as it is a great shot. Not many folks can play that shot and be successful."

"Very unique in its own style. A very powerful shot indeed. He swings himself and the helicopter part is to keep balance. He doesn't follow through and the shot is more of showmanship," felt former Australia skipper Allan Border.

"I think this shot can really upset the bowler's line and length. The bowler is completely lost to a shot like this. It is an awesome shot and can change the whole scenario," said Richards.

According to Border, "It is an extraordinary shot and I have not seen much of this. You need to be a daredevil to play this shot".

As regards to Sehwag's 'upar cut', Imran said, "Out of all innovations, if I had to play my cricket again, this is one shot which I would have loved to play and would have been very useful against the fast bowlers.

"I would have enjoyed playing this shot against the fast West Indian bowlers. I saw Tony Greig in 1975 against the Australian attack of Lillee and Thomson play this particular shot and get a 100 odd runs."

Richards felt the shot is all about sliding or kissing the ball rather than timing it.

"Allan played the shot against Joe Garner. It's all about sliding or kissing the ball with the bat. It's not much about timing. I think this shot has been a revelation against the fast bowlers and their deadly bouncers," he said.

About Harbhajan's doosra, Imran said, "It is one of the greatest innovations in terms of spin bowling. I remember Saqlain started it and then the others joined in. Earlier it was the arm ball and now it is the doosra. I think it is a great bowling technique and is a wicket taking delivery."

Pietersen's palti, aka switch hit, was not left far behind in the popularity charts.

"Pietersen is hugely skillful and if you're good enough you can pull it off," Border said.

Going back to his playing days, Border said, "Viv was one of the first batsmen who would move a lot to the leg side to hit the ball on to the off side. In those days seven players were allowed on the on side and the wide rule was not very strict. Bowlers use to bowl only on the leg stump and a bit wide. So Viv used to hit the ball to the off side."

"In modern day cricket, these guys are improvising shots to hit to areas where there are few players blocking the field," the Australian said.

Richards said chances of LBW increases as far as playing the palti shot is concerned.

"The only problem with the shot is that the chances for LBW are very high. It is a very inventive shot and brings a lot of excitement to the game.

Imran felt the shot is not unfair to the bowler. "I would have loved to bowl to a batsman playing that shot. You have to pitch it right and then you have your chances of getting him out. It will be difficult to play that shot against a fast bowler.

"This shot is easier to play against a bowler who is predictable but a very risky shot against a quality bowler. In short, a very dangerous shot to be playing," Imran said.