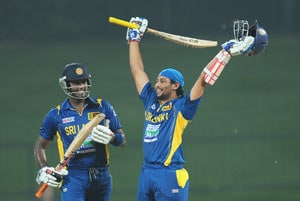 Sri Lanka, who were set a revised target of 197 for victory through the Duckworth-Lewis method in a match reduced to 33 overs a side because of rain, surged to 200 for 3 with 11 deliveries to spare to take an unbeatable 2-0 lead in the five-match series.

Sri Lanka won the second ODI by 14 runs on Sunday, while the opening match, also in Pallekele, had been abandoned without a ball being bowled.

New Zealand, who had been put in by Mahela Jayawardene, had ridden on a career-best unbeaten 96 by Bradley-John Watling, the opener, to post a competitive 188 for 6 in their 33 overs, an innings that was twice interrupted by rain.

Sri Lanka had a stiff target to chase down and appeared in trouble when they slipped to 73 for 3 in the 15th over, having lost Upul Tharanga, Kumar Sangakkara and Jayawardene.

Dilshan, who had dominated the early exchanges, however found an able ally in Mathews, the vice-captain, to repel the New Zealand charge. After a cautious start, Mathews too opened out to play some handsome strokes as the runs flowed in torrents towards the second half of the partnership.

Playing his 250th ODI, Dilshan remained unbeaten on 102 off 95 deliveries with 12 fours and one six, off Tim Southee with which he reached three figures, while Mathews' 47-ball 54 contained seven fours.

Earlier, during a stop-start first session, Watling smashed 12 fours in his 88-ball knock, accelerating dramatically from 50 off 70 deliveries to amass 46 in his next 18. With Nathan McCullum (22 n.o.), Watling put on 71 for the unfinished seventh wicket in just 36 deliveries as Sri Lanka went to pieces towards the end of their bowling innings, conceding 67 in the last five overs. James Franklin was the other main scorer with a 25-ball 26.

New Zealand lost an early wicket after being put in to bat as Rob Nicol (7) was caught by Jayawardene in the slips in Lasith Malinga's second over. Mathews then claimed his 50th one-day wicket when he trapped Brendon McCullum, the hard-hitting batsman, leg-before for 13.

Mathews also had a chance to dismiss Ross Taylor, the New Zealand captain, in the same over, but failed to hold on to a return catch when the batsman had not even opened his account.

New Zealand were under pressure at 49 for 4 after losing Taylor (7) and Jacob Oram (2), but Watling and Franklin steadied the innings with a 56-run stand for the fifth wicket.

New Zealand made two changes from the side that played the last match, bringing in Brendon McCullum, fit again, and Oram for Tom Latham and Andrew Ellis. Sri Lanka retained the team.