Sri Lanka's record-setting batsman Tillakaratne Dilshan insisted on Friday he is the victim of a smear campaign after he was wrongly accused of having failed a dope test. 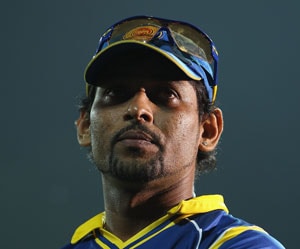 Sri Lanka's record-setting batsman Tillakaratne Dilshan insisted on Friday he is the victim of a smear campaign after he was wrongly accused of having failed a dope test.

The 34-year-old said it was not the first time he had suffered from such allegations and that he was not even selected for a random test after last weekend's rain-ruined match against Australia in Colombo.

"On Wednesday, there were reports that I had failed a dope test," Dilshan told the BBC.

"It is not the first time these kinds of allegations have surfaced - they have done so after every recent tournament I have played in."

"I feel like there is an attempt to distract my game but I am not worried. I try to ignore the reports and concentrate on my game instead."

"What actually happened is the International Cricket Council randomly selected Ajantha Mendis and Chamara Silva to give blood samples after our game against Australia."

"They did not even take my blood sample so I simply don't know where these reports have come from."

Dilshan smashed a brilliant 144 during a record World Cup first-wicket stand of 282 with Upul Tharanga (133) to lift Sri Lanka to 327-6 before taking a career-best 4-4 to help bowl Zimbabwe out for 188 on Thursday.

Sri Lanka's comfortable 139-run win lifted them to the top of Group A, with seven points from five matches, making them the first team to reach the quarterfinal stages.

But Dilshan said the doping allegations had not spurred him on to his breathtaking efforts.

"I was not trying to reply to my critics, or to those reports. I was not under any pressure, nor was I angry. But it is not pleasant when attempts are being made to distract you, especially when you are playing in a World Cup."

Comments
Topics mentioned in this article
World Cup 2011 Sri Lanka Cricket Team Daniel Vettori Indian Premier League 2011 Zimbabwe Cricket Team Cricket Tillakaratne Dilshan
Get the latest updates on ICC T20 Worldcup 2022 and CWG 2022 check out the Schedule, Live Score and Medals Tally. Like us on Facebook or follow us on Twitter for more sports updates. You can also download the NDTV Cricket app for Android or iOS.