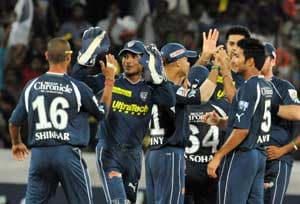 "We are proud to have a leading global brand like Emirates as our Team Sponsor for the next three seasons of the IPL," Gayatri Reddy, co-owner of the Deccan Chargers, said.

"We are confident this association with Emirates will be fruitful. With an exciting new squad and sponsor, we look forward to the tournament and repeating our winning performance in DLF IPL 2012," she added.

Orhan Abbas, Emirates Vice President India and Nepal, said, "Through this sponsorship we have the chance to connect with the people who we connect to 122 destinations and show our ongoing commitment to a nation which Emirates has been serving since we began operating in 1985."

The Deccan ChargersÂ  whose home games will be played at Vizag, Cuttack and Hyderabad - will feature a host of star players such Sri Lanka's Kumar Sangakkara, who will captain the side, Proteas JP Duminy and Dale Steyn, as well as Indian wicketkeeper-batsman Parthiv Patel.

Patel, Shikhar Dhawan, Amit Mishra and Manpreet Gony had the honour of unveiling the 2012 home kit today during the press conference.

Comments
Topics mentioned in this article
Cricket Indian Premier League 2012 Sachin Ramesh Tendulkar Ricky Ponting Deccan Chargers Indian Premier League 2011 HYD
Get the latest Cricket news, check out the India cricket schedule, Cricket live score . Like us on Facebook or follow us on Twitter for more sports updates. You can also download the NDTV Cricket app for Android or iOS.