England, led by Ian Bell, managed a win to end the series 2-3. Target of 227 was never going to push them but Indian bowlers did manage to put in what looked like their best. 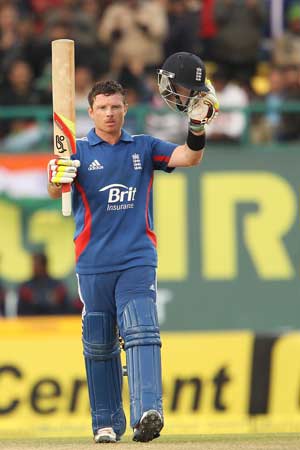 Ian Bell, and England, rounded off the One-Day International series the way they had started it in Rajkot a fortnight back - with a well-earned victory. India, too, ended their complement of home ODI matches this season the way they had begun it in Chennai just under a month ago - with a defeat that owed its origin to another top-order collapse.

Outplayed and overwhelmed in their three previous games, England finally found some cause for cheer in the first international fixture at the HPCA Stadium in Dharamsala on Sunday (January 27). Having already surrendered the series 1-3 following their five-wicket loss in Mohali on January 23, England signed off with a flourish. Ian Bell's third ODI hundred piloted them to a comprehensive seven-wicket triumph, reducing the margin of India's series victory to 3-2.

Bell had been in the forefront of England's nine-run win in Rajkot on January 11 with a flowing 85. He was every bit as imperious in Dharamsala, guiding England through a potentially tricky run chase after another Suresh Raina masterpiece had hauled Mahendra Singh Dhoni's men out of the depths of 24 for three and taken them to a reasonably competitive 226.

Alastair Cook had every reason to be satisfied with his bowlers' performance after he stuck India in, but he also wasn't unaware that it was important for him and Bell to begin well for England to rein in that total. Bhuvneshwar Kumar and Shami Ahmed didn't consistently string enough good deliveries together, allowing England's openers to put on 53 for the opening wicket.

Even though India struck twice in reasonably quick succession, Shami redeeming himself somewhat by getting rid of Kevin Pietersen, England were always in control with Bell marshalling their reply. He alternated between bouts of scorelessness and periods of sparkling strokeplay as England cruised to 227 for three with 16 deliveries in the bag.

Ishant Sharma and R Ashwin in their first spells, and Ravindra Jadeja all the way through, kept probing away. England batted with circumspection when the ball deserved respect, but didn't allow themselves to get into a rut. Joe Root was the more enterprising partner in a stand of 79 for the third wicket with Bell, who himself played some stunning strokes through the offside off front foot and back, batting with a command over his craft that was as breathtaking as the ground's scenic beauty.

Eoin Morgan then exploded in a flurry of sixes towards the end to ensure there was no late drama, however artificial.

In the morning, Raina fashioned another Indian recovery with his fourth consecutive half-century, an innings of great flair and tremendous authority. Alongside Jadeja, he stabilised the innings in reasonably tough batting conditions, smashing his way to a 98-ball 83 that formed the bedrock of India's tally. Bhuvneshwar provided the final push with a boundary-filled 31.

The Indian top order's inability to battle through difficult periods was laid threadbare once again. Like in their first home ODI of the season against Pakistan in Chennai in late December, there was a distinct reluctance to respect the conditions as well as the quality of the bowling, and within no time, India found themselves in a deep hole.

The ball didn't nip around prodigiously, but the discipline required to come through the early part, particularly with two new balls being used, was conspicuous by its absence. Extravagant strokes were not the need of the hour, but clearly, neither Rohit Sharma nor Virat Kohli had donned his thinking cap.

Rohit was the first to depart, driving loosely at Tim Bresnan and putting James Tredwell at second slip in business. Evidently, Kohli hadn't heeded that dismissal because he played an identical shot first ball; the catch was a lot more straightforward but Tredwell needed four tries before safely pouching it, leaving India reeling at 13 for two.

Yuvraj Singh averted the hat-trick, but it didn't take long for England to get rid of him. Steven Finn - once again outstanding as he bowled with pace, procured considerable bounce, moved the ball around and, most crucially, did not knee the stumps - got Yuvraj to edge to point, exacerbating India's top-order woes that have been on view all series long.

Gautam Gambhir batted with greater authority than he has for most of the winter. There were a couple of characteristically crunchy cuts and one glorious straight drive off Bresnan, but just when he looked set to kick on, he cut a short delivery from Tredwell - 17 of whose 22 ODI victims are left-hand batsmen - straight to point in the offspinner's first over.

Raina, who went past 4000 ODI runs, was put down on five by Tredwell at second slip, a tough low chance, off Chris Woakes, but quickly established his authority over Woakes with a series of blazing strokes. He was again reprieved on 61 by Cook, but those let-offs didn't detract in any way from the quality or significance of his knock.

Dhoni briefly tried to put England off their plans by walking around in his crease before paying the price for doing so once too often, rapped on the pad by Finn though the ball might have been heading over the stumps. Half the side back in the hut with just 79 on the board, India were in deep trouble when Raina and Jadeja bailed them out.

Though both slammed two giant sixes each, much of their stand was based around intelligent rotation of the strike and excellent running between the wickets. With the ball becoming softer, it began to sit on the pitch slightly but despite some turn, Raina and Jadeja targeted the fifth bowler, made up by Root and Samit Patel.

Towards the end, Bhuvneshwar, showing that he can translate domestic runs to the international level too, and Ashwin struck a few meaty blows, their 34-run stand primarily responsible for nudging India past the 225-mark. As it turned out, it was well short of posing England a meaningful challenge.