Opener Dilshan, who hit an unbeaten 115 in the fourth game in Pallekele on Sunday, plundered 13 boundaries before he was bowled for 99 by McLaren in the 39th over. Ajantha Mendis claimed three for 36. 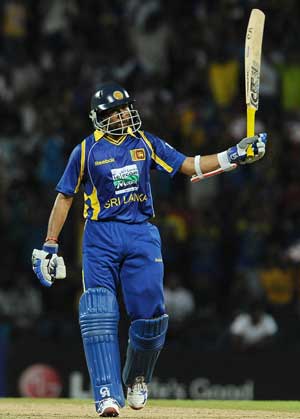 The hosts, already holding a decisive 3-1 lead, piled up 307-4 after electing to take first strike and then shot the Proteas out for 179 in 43.5 overs in the day-night match at the Premadasa stadium.

AB de Villiers played a captain's knock of 51, but could not prevent South Africa from being condemned to their 13th defeat in 15 one-dayers on Sri Lankan soil.

The tourists were struggling at 137-8 when Ryan McLaren hit 29 and Aaron Phangiso an unbeaten 18 down the order to boost the total.

Opener Dilshan, who hit an unbeaten 115 in the fourth game in Pallekele on Sunday, plundered 13 boundaries before he was bowled for 99 by McLaren in the 39th over.

Lahiru Thirimanne, promoted to number three, scored 68 and Kumar Sangakkara was unbeaten on 75 off 45 balls as the South African bowlers wilted in steamy conditions.

Left-handed Thirimanne and Dilshan put on 163 for the second wicket after Kusal Perera was caught behind off Morne Morkel in the fifth over.

South Africa lost wickets in a heap to plunge to 85-6 by the 20th over, with Senanayake and Lakmal grabbing two wickets each.

The Proteas were 60-1 in the 10th over when the dismissal of star batsman Hashim Amla for 18, leg-before to Senanayake, triggered a middle-order collapse.

Lakmal removed Farhaan Behardien and David Miller in the space of three balls after Faf du Plessis had fallen to Thisara Perera for six.

De Villiers and the tailenders delayed the end, but Sri Lanka emerged comfortable winners with an impressive all-round display.

The tourists recalled McLaren and spinner Phangiso in place of Rory Kleinveldt and Robin Peterson.

The teams will now play three Twenty20 internationals, with the first match to be held at the same venue on Friday.