New Zealand-Sri Lanka first ODI called off due to rain

New Zealand were 13-1 in reply to Sri Lanka's 288-9 when heavy rain lashed the southern port city and wiped out the rest of the match. Earlier, Tillakaratne Dilshan, Kumar Sangakkara and Angelo Mathews hit half-centuries to lead Sri Lanka to a big total. 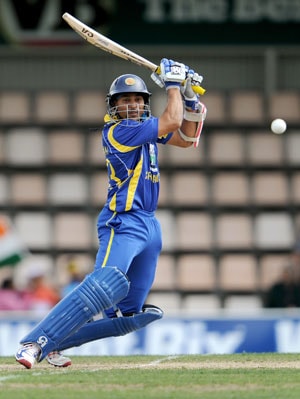 Bad weather forced the first one-day international between New Zealand and Sri Lanka to be abandoned in Hambantota on Sunday, cutting short an impressive display by the hosts.

New Zealand were 13-1 from 4.2 overs in reply to Sri Lanka's 288-9 when heavy rain lashed the southern port city and wiped out the rest of the match.

Stand-in captain Kyle Mills gave the tourists a flying start when he trapped opener Dimuth Karunaratne leg-before with the first delivery of the innings.

Dilshan and Sangakkara, however, settled in to pulverise the Black Caps during a second-wicket partnership of 137.

Sangakkara made 79 off 81 balls with nine boundaries and two sixes, while Dilshan scored 81.

Left-arm spinner Anton Devcich dealt a double blow when he removed Sangakkara and former captain Mahela Jayawardene in the space of four deliveries to reduce Sri Lanka to 139-3.

But Dilshan put on 58 for the fourth wicket with skipper Mathews, who smashed nine fours and a six in an unbeaten 74 off 64 balls.

Mills, who was named captain for the tour after regular skipper Brendon McCullum was rested, was New Zealand's most successful bowler with three for 49.

When the Black Caps batted, Devcic was bowled in Lasith Malinga's first over, before Tom Latham and Rob Nicol denied the hosts further success.

The second of the three one-dayers is scheduled to be played at the same venue on Tuesday.