The Australians scored 305 for five off their 50 overs, with man-of-the-match debutant Phil Hughes hitting 112, and bowled out Sri Lanka for 198 with Clint McKay taking four for 33. 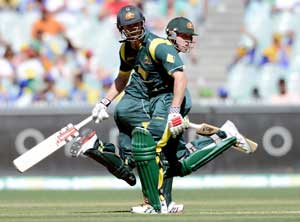 Opener Phil Hughes scored a debut century as Australia amassed 305 for five and dismissed Sri Lanka cheaply for a 107-run victory in the opening match of the five-game one-day international series on Friday.

Hughes became the first Australian to score a century on his ODI debut as the hosts posted a big score after winning the toss against Sri Lanka in Melbourne.

The diminutive left-hander cracked 112 off 129 balls to help set the Sri Lankans a competitive run chase under lights at 6.12 runs an over.

But the Sri Lankans, despite being well in the match at 111 for two, self-destructed with three run outs and Clint McKay (4-33) helped bowl the tourists out for 198 with 10 overs to spare.

Hughes was the highlight of a free-scoring Australian innings with skipper George Bailey scoring 89 off 79 balls and David Hussey chipping in with a late unbeaten 60 off 34 balls.

Hussey, the younger brother of veteran Mike Hussey, finished with a flourish, plundering 21 runs off the last over from off-spinner Ajantha Mendis, including a six over long-off to bring up his half-century.

There were a couple of failures in the Australian innings with Usman Khawaja run out for three after setting off for a risky single and being sent back by Hughes.

Fellow top-order debutant Aaron Finch went for 16 and Glenn Maxwell was caught attempting to chip over the on side off Nuwan Kulasekara for five.

Paceman Lasith Malinga didn't fare well on his return for Sri Lanka taking 1-61 on a pitch suited for batting.

Sri Lanka were travelling well at the halfway stage of their innings before Tillakaratne Dilshan (51) was run out by a direct hit from Usman Khawaja.

The Sri Lankans paid dearly for suicidal running between wickets with cover fieldsman Glenn Maxwell running out Angelo Mathews (12) and Lahiru Thirimanne (0) in consecutive deliveries in the 30th over as Sri Lanka slumped to 128 for five.

Mitchell Johnson (2-43) dismissed Jeevan Mendis (20) caught at mid-off and wicketkeeper Brad Haddin pulled off a diving catch to remove the danger man Dinesh Chandimal for 73 off 95 balls in the following over from McKay.

It is the most first-gamers Australia have fielded in an ODI game since January 1986 when Simon Davis, Dave Gilbert, Bruce Reid and Steve Waugh made their debuts.

The second game in the series takes place in Adelaide on Sunday.