IPL 2021: Trent Boult fell down chasing a ball to the boundary after he lost balance, and needless to say, Jimmy Neesham saw the funny side to it. 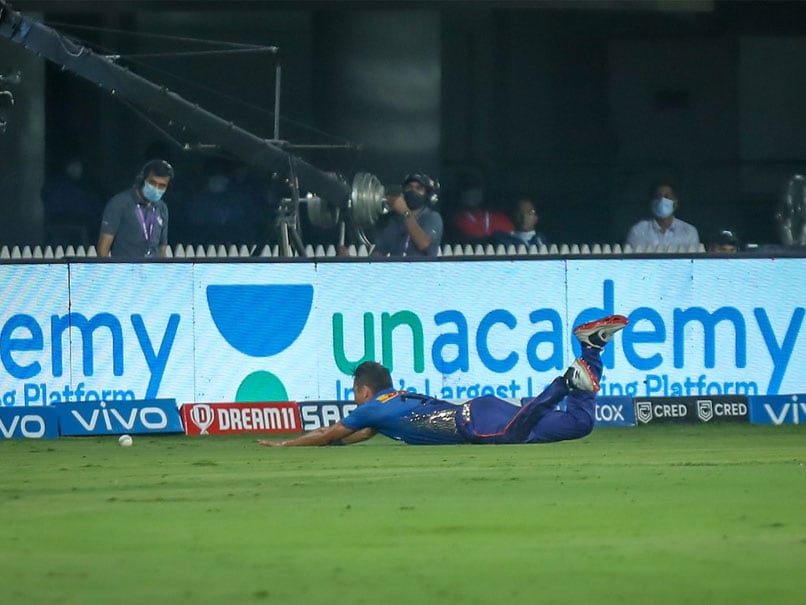 IPL 2021: Trent Boult fell down after losing his balance while trying to stop a boundary.© BCCI/IPL

Trent Boult bowled brilliantly at the death as Mumbai Indians (MI) pulled off a close win against SunRisers Hyderabad (SRH) in Match 9 of Indian Premier League (IPL) 2021. However, amid a low-scoring match that saw some drama with the momentum frequently shifting from one team to the other, Boult also provided viewers with a moment to lighten the mood. Chasing the ball after SRH captain David Warner hit a cover drive off Krunal Pandya in the fifth over, the left-arm pacer gave it his best but ended up having a funny fall.

Running after the ball from mid-off, Boult lost balance and threw his arms around for a few steps as he tried to regain his momentum, but ended up landing flat on his face.

His New Zealand compatriot and MI teammate Jimmy Neesham, not being one to miss out on an opportunity to troll a friend, took to Twitter to have a laugh at Boult's expense at the end of the game.

"Everyone send me their best GIF of Boulty falling over in the field tonight please," Neesham tweeted with a series of laughing emojis.

Of course, Twitterati did not disappoint, and he was soon left with some golden content

Someone even shared an Instagram reel by comedian Abhijit Ganguly.

Defending a total of 150, Boult struck thrice at the death as SRH were bowled out with two deliveries to spare.

SRH needed 31 off the final four overs, but Boult and Bumrah dug into their lower order and sealed the win for MI.

James Neesham Cricket
Get the latest updates on India vs South Africa and check out  Schedule, Results and Live Score. Like us on Facebook or follow us on Twitter for more sports updates. You can also download the NDTV Cricket app for Android or iOS.