India vs South Africa: Rohit Sharma smashed his fifth Test hundred as India dominated the proceedings on Day 4 in Vizag. 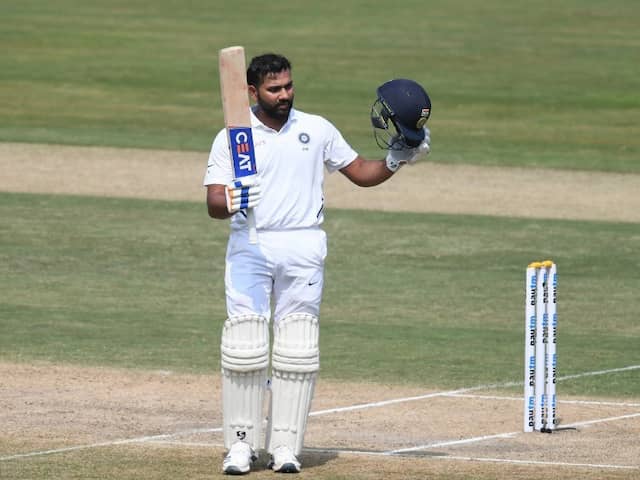 Rohit Sharma brought up his second Test century as an opener.© AFP

Rohit Sharma brought up his second hundred in the ongoing Test match against South Africa in Vizag, becoming the first batsman in Test history to score two hundreds on debut as an opener. Rohit Sharma smashed nine boundaries and played four shots that went over the fence in the second innings on Day 4 to reach the magical three-figure mark. Rohit, who has previously played for India in Tests only as middle-order batsman, had scored 176 runs in the first innings when he put on 317 runs for the first wicket with Mayank Agarwal. Rohit's century in the second innings put India in a commanding position after South Africa were bowled out for 431 runs.

In the ongoing Test, Rohit Sharma smashed a total of 13 sixes, which is the most by any Indian batsman in one Test match. Rohit went past Navjot Singh Sidhu who had hit eight sixes in a Test against Sri Lanka.

After bowling out South Africa, India started their second innings with a lead of 71.

Mayank Agarwal, who top-scored for India in the first innings, fell cheaply in the second innings as he edged one straight to Faf du Plessis at first slip off Keshav Maharaj.

Cheteshwar Pujara found his touch after getting a reprieve from Quinton de Kock, who dropped a catch when Pujara was on eight.

Pujara went onto score his 21st Test half-century. Pujara and Rohit stitched together a 169-run partnership to take India's lead past 250.

Vernon Philander sent back Pujara on 81 as he trapped him right in front of the stumps.

For South Africa, Vernon Philander and Keshav Maharaj managed to pick one wicket apiece. Rohit Sharma's innings came to an end when he was stumped off Keshav Maharaj on 127. India declared their innings at 324 for four, setting South Africa a target of 395 runs to win.

Before bad light forced the officials to call off the day's play, Ravindra Jadeja removed Dean Elgar for two. South Africa need 384 runs to win with nine wickets in hand on the final day.