Shikhar Dhawan interviewed KL Rahul after taking over Chahal TV and came up with a hilarious reason for the leg-spinner's absence. 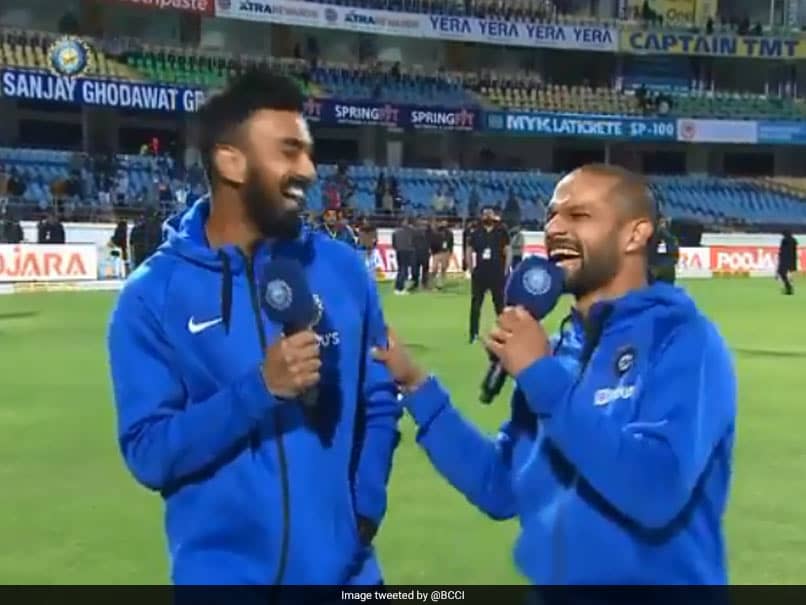 Shikhar Dhawan played a starring role in India's series-levelling 36-run win over Australia at the Saurashtra Cricket Association Stadium in Rajkot on Friday. Opening the batting with Rohit Sharma, the left-hander smashed 96 off just 90 balls to set the perfect platform for KL Rahul's assault later in the innings that powered the hosts to 340 for six in the second ODI. Australia were bowled out for 304 in 49.1 overs as India drew level at 1-1 in the three-match series. Yuzvendra Chahal has been in and out of the playing XI in recent times but still has been a constant presence all thanks to his post-match interviews on Chahal TV. However, the leg-spinner was missing from action on Friday with Dhawan taking over his duties. Not only did the opener do a great job with his guest KL Rahul, he also came up with a hilarious reason for Chahal's absence.

"Aap log soch rahe hoge ki Chahal kahaan hai? Finally, aaj woh apne daant andar karwane gaya hai. Humari itne saalo ke koshish ke baad. Isliye aaj woh dikh nahi rahe aur unke daant bhi nahi dikh rahe (You all must be wondering where Chahal is? Finally, he has gone to fix his teeth after many years of us trying to get him to do that. That is why neither him nor his teeth can be seen)," said Dhawan, leaving KL Rahul, who was standing next to him, in complete splits.

WATCH: @SDhawan25 takes over Chahal TV as he recaps #TeamIndia's win with @klrahul11- by @28anand #INDvAUS

On a more serious note, Dhawan praised Rahul for his brilliant knock despite dropping down from one-down to No.5 and asked him about his thought process.

"It helps that I have been scoring runs in previous series in the last month. I had the confidence and I used my form well. Playing at No.3 or No.5 as an opener is a different challenge but I was ready for it. I wanted to enjoy it. Today it came off and a lot of credit goes to you guys and the start you guys gave and the way Virat (Kohli) kept going on," said Man of the Match KL Rahul.

Rahul blasted 80 off just 52 balls, which included six fours and three sixes. Captain Virat Kohli too played a fine knock, scoring 78 off 76 balls as India posted an imposing total on board.

Steve Smith scored a brilliant 98 and got support from Marnus Labuschagne, who scored 46 off 47 balls, but Australia were always behind the eight ball in the run-chase and eventually fell well short.

Mohammed Shami took three wickets while Navdeep Saini, Kuldeep Yadav and Ravindra Jadeja took two wickets apiece. Jasprit Bumrah took one wicket but was the most economical bowler of the match, giving away just 32 runs off his 9.1 overs.

The third and final ODI of the series will be played at the M.Chinnaswamy Stadium in Bengaluru on Sunday.