Jasprit Bumrah and Navdeep Saini showed a glimpse as to what might be in store for the David Warner, Steve Smith and co. 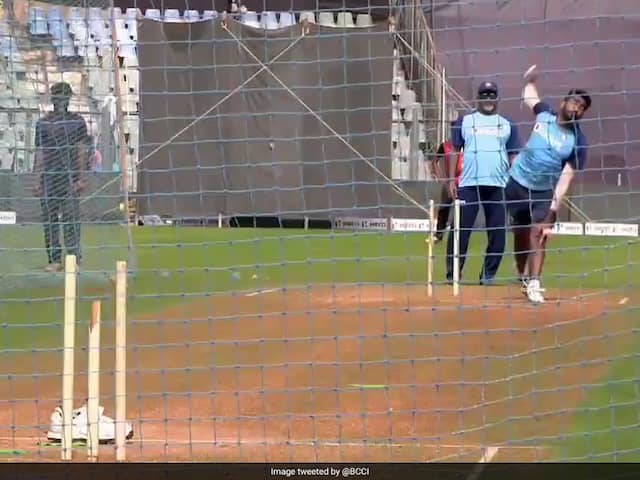 India's pace attack, being led by the No.1 bowler in the world in ODIs Jasprit Bumrah, will pose a stern test for the visiting Australian batsmen. In Bumrah, Mohammed Shami, Shardul Thakur and Navdeep Saini, the hosts have included four fast bowlers in the squad for the Australia ODIs. And while all four might not get to play at the same time, two of them -- Jasprit Bumrah and Navdeep Saini -- showed a glimpse as to what might be in store for the likes of David Warner, Steve Smith and Marnus Labuschagne.

The official Twitter handle of the Board of Control for Cricket in India (BCCI) posted a video of training session, in which Bumrah and Saini can be seen practicing their yorkers.

Speaking ahead of the first One-day International (ODI) against Australia on Tuesday, India captain Virat Kohli himself revealed that Bumrah even got the better of him in the practice session.

Virat Kohli said, Jasprit Bumrah is one of the most skillful bowlers and brings intensity to the net session.

"Well, Bumrah is playing with the team since last four years now, and this is probably the second time I have ever got out in the net, hitting a few against him and not getting out. I'm glad that was the last ball of my net session because he ran back to his mark, but I got out. It's fun sort of competition, he's according to me the most skillful bowler and to play against him, he brings match intensity at the nets," Kohli said.

"I can assure you that, he's not shy on hitting us in the head or targeting our ribs every now and then," he added.

India will play Australia in the first ODI at the Wankhede Stadium in Mumbai on Tuesday, with the second match scheduled for January 17 in Rajkot. The final match of the series will be played on January 19 in Bengaluru.

Virat Kohli India vs Australia 2020 Cricket
Get the latest updates on IPL 2020, check out the IPL Schedule for 2020 and Indian Premier League (IPL) Cricket live score . Like us on Facebook or follow us on Twitter for more sports updates. You can also download the NDTV Cricket app for Android or iOS.