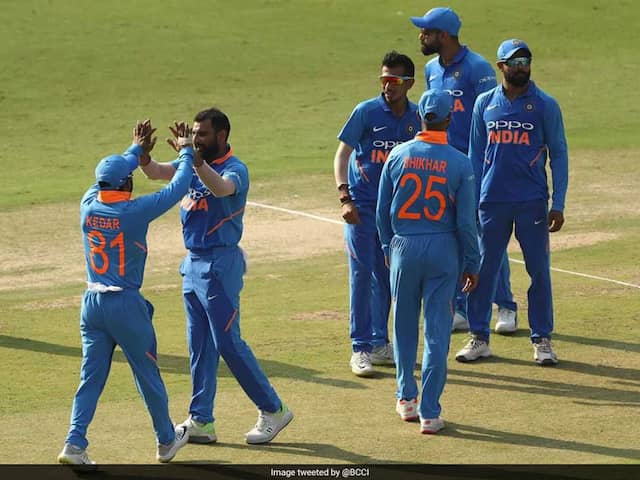 Skipper Virat Kohli's resolute 40th hundred under pressure steered India to a competitive 250 despite a middle-order collapse in the second One-day International in Nagpur on Tuesday.  Australia's spin troika of Adam Zampa (2/62 in 10 overs), Glenn Maxwell (1/45 in 10 overs) and Nathan Lyon (1/42 in 10 overs) bowled well in the middle overs although it was Pat Cummins who had the best figures of 4 for 29. Kohli came in after Cummins sent back opener Rohit Sharma (0) in the very first over. The Indian skipper was in good touch and played some delightful drives whenever the ball was pitched up. In conditions which tested the fitness of each and every player, Kohli struck only 10 boundaries and ran a lot of singles and twos in his 116-run knock. He was at the crease till the 46th over, faced 120 balls in an innings which will rank among one of his top ODI knocks in recent times. Kohli steadily build the Indian innings even as he saw the fall of colleagues Shikhar Dhawan (21) and Ambati Rayudu (18). Dhawan looked in good touch as he too hit some crushing boundaries before being trapped by part-timer Glenn Maxwell. Rayudu struggled to rotate strike as the ball was not coming on to the bat and was eventually adjudged leg before off Nathan Lyon. (SCORECARD)

Aaron Finch India vs Australia, 2018/19 India vs Australia, 2nd ODI Cricket Live Blogs Live Score Live Cricket Score
Get the latest Cricket news, check out the India cricket schedule, Cricket live score . Like us on Facebook or follow us on Twitter for more sports updates. You can also download the NDTV Cricket app for Android or iOS.