WTC Final: Title Win Against India One Of The Greatest Moments In All New Zealand Players Careers, Says Kane Williamson

WTC Final: New Zealand captain Kane Williamson reflected back on the tremendous win against India in the World Test Championship at the Ageas Bowl in Southampton. 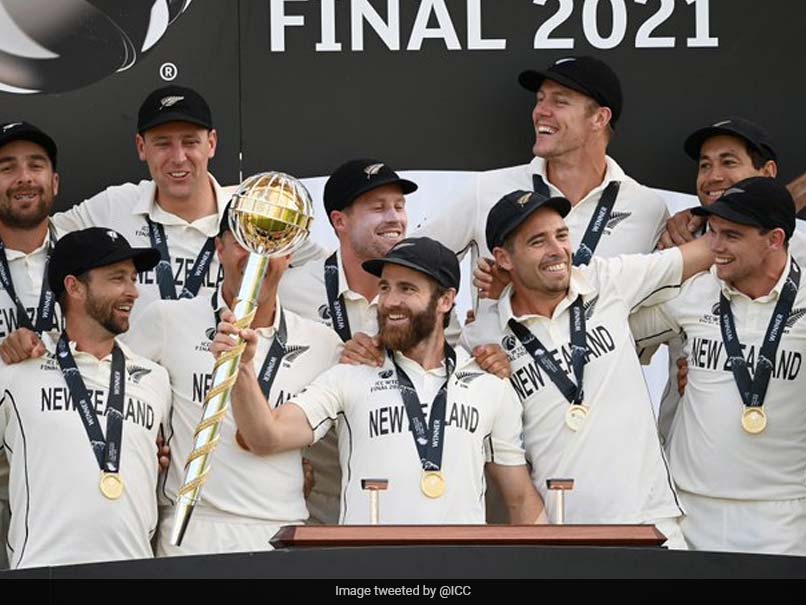 Kane Williamson celebrated with the New Zealand players after winning the WTC Final versus India.© Twiter/ICC

New Zealand captain, Kane Williamson feels the World Test Championship(WTC) victory against India will reflect as one of the greatest moments in the Black Caps players' careers. Williamson and Ross Taylor played unbeaten knocks off 52 and 47 respectively as New Zealand defeated India by eight wickets to clinch the inaugural edition of the WTC at the Ageas Bowl, Southampton on Wednesday. "To sit there and celebrate that along with winning the first WTC is really special. These guys that have just given so much to our game, it is pretty satisfying that [WTC win] would reflect as one of the greatest moments in their career," Williamson said in a video posted by Black Caps on Twitter.

Hear from Kane Williamson as the team reflects on an inaugural World Test Championship victory pic.twitter.com/vXwUB8S1fg

"Someone like BJ has been a massive part of team and growth with side. He has been a leader along with his contributions with bat and glove," Williamson said.

A complete effort on the Reserve Day saw New Zealand edging India in a final which had its ebbs and flows in the first innings.

The Kiwis made full use of the slender 32-run lead and the Williamson-led side bundled out India cheaply in the second innings to get a target of just 139.

The batsmen did not relent and in the end, the side walked away with a comfortable victory.

"Yesterday was an amazing day to be a part of and the whole match really was so competitive as we were all expecting. Going down to wire into the final day all three results were possible," he added.

"You saw the passion from all the guys on the sideline. It was nice to be out there with Ross and have that partnership," Williamson pointed.

Ross Taylor World Test Championship 2021 India vs New Zealand, Final Cricket
Get the latest updates on SA vs IND 2021-22, check out the Schedule and Live Score . Like us on Facebook or follow us on Twitter for more sports updates. You can also download the NDTV Cricket app for Android or iOS.