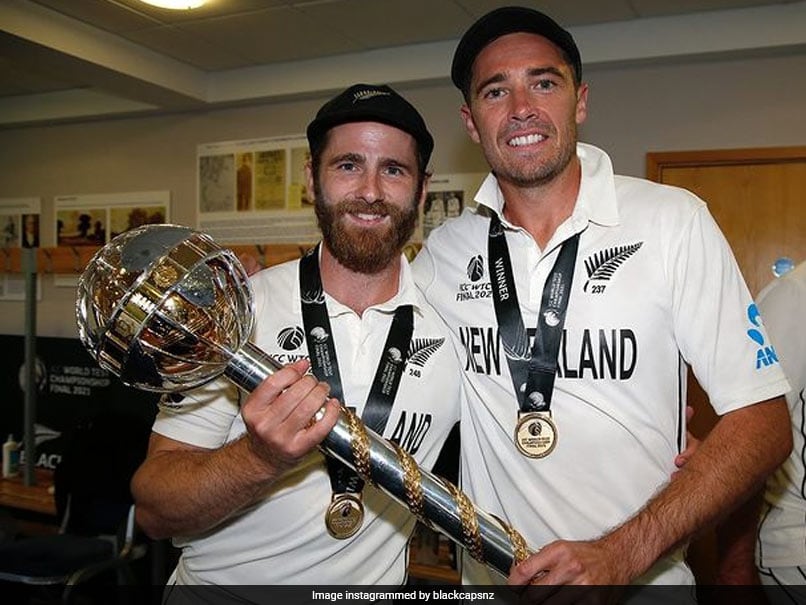 The New Zealand cricket team arrived home after their emphatic victory over India in the recently-concluded World Test Championship (WTC) final at The Ageas Bowl in Southampton. The New Zealand team had registered an eight wicket win on the Reserve Day of the match after rain interrupted proceedings from Day 1. The official handle of New Zealand Cricket shared an Instagram reel of the players at the airport on "home soil", holding the ICC Test Championship Mace. BlackCaps shared the short video with a caption, "Back on home soil #WTC21 #BACKTHEBLACKCAPS #CricketNation #Cricket."

On Friday, ICC had shared pictures of New Zealand players aboard their flight to New Zealand. Tim Southee could be seen in one of the pics holding the Test Mace.

The caption read, "An important piece of carry-on luggage here. The #WTC21 Mace will travel to its new home in style @blackcapsnz."

The first-ever WTC final started on a sour note as rain played spoilsport, keeping the players and the umpires off the ground on Day 1.

Despite frequent rain delays and interruptions, fans were treated to some enthralling cricketing action from both sides.

India were asked to bat after Kane Williamson won the toss. The New Zealand bowlers kept the run-rate in check and bowled out the opposition for 217 in their first innings.

In reply, the New Zealand tail did well to give the team a crucial 32-run lead.

India's batting superstars failed to make their mark and the team was bundled out for just 170 in the second innings as Kyle Jamieson proved to be the nemesis once again.

Chasing 139 for victory, New Zealand's Ross Taylor and Kane Williamson saw their team through to a famous victory in the last hour of play on the Reserve Day.

India Cricket Team
Get the latest updates on ICC Women's Cricket World Cup 2022 and IPL 2022, check out the Schedule , Live Score and IPL Points Table. Like us on Facebook or follow us on Twitter for more sports updates. You can also download the NDTV Cricket app for Android or iOS.