WTC Final: Dinesh Karthik took to Twitter to give fans an update on the weather in Southampton, three and a half hours before the start of play on Day 3. 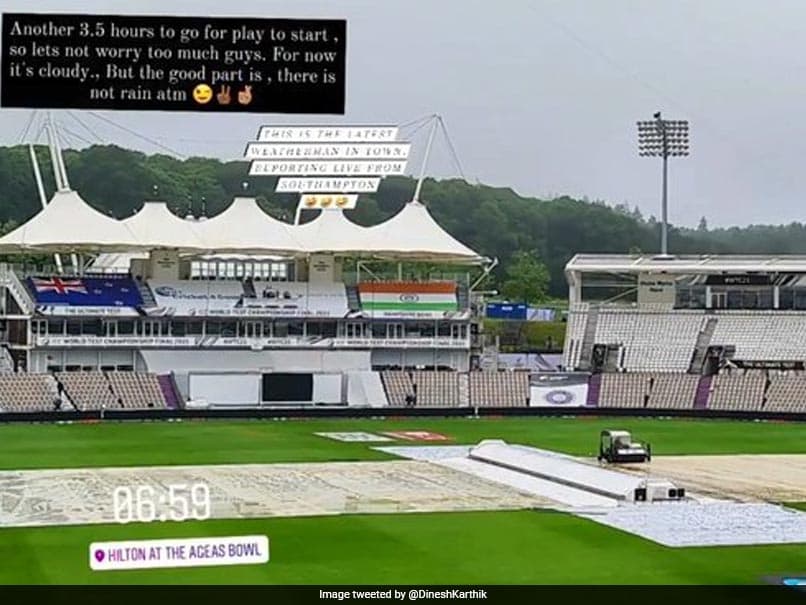 IND vs NZ: Dinesh Karthik shared a picture of The Ageas Bowl ahead of Day 3.© Twitter

Veteran wicket-keeper batsman Dinesh Karthik took to Twitter on Sunday to inform fans that it was cloudy in Southampton but there was no rain -- three and half hours before the start of play on Day 3. The opening day's play in the World Test Championship (WTC) final at The Ageas Bowl was called off without a ball being bowled on Friday. Indian skipper Virat Kohli finished the second day of the summit clash unbeaten on 44 as India and New Zealand went to stumps with the game evenly poised. Kohli and Ajinkya Rahane put on an unbeaten stand of 58 as India reached 146/3 when bad light forced an early end to the day, with only 64.4 overs of play possible.

Ahead of the third day, Karthik, who is at the venue on commentary duties, shared a picture from the stadium informing that fans needn't worry as "there is no rain at the moment".

"Another 3.5 hours to go for play to start, so lets not worry too much guys. For now it's cloudy. But the good part is, there is not rain atm," Karthik wrote on the photo while sharing it on Twitter.

After a washout on Day 1, New Zealand won the toss and elected to bowl, looking to make the most of the overcast conditions in Southampton on Day 2.

And it was India who started the stronger as Rohit Sharma and Shubman Gill combined to put on 62 runs for the first wicket.

Rohit looked particularly threatening, with two boundaries through the off-side in Tim Southee's fourth over of the morning.

However, Kyle Jamieson made the breakthrough with a full ball angled in. It moved away late and Rohit edged it to Southee at third slip for 34.

His dismissal slowed the scoring, and he was soon joined in the dressing room by his opening partner Gill, who feathered one through to BJ Watling off the bowling of Neil Wagner for 28.

Cheteshwar Pujara and Kohli saw India through to lunch at 69/2 but the scoring rate had dropped rapidly, and that continued into the second session.

Rahane joined Kohli in the middle as India tried to rebuild. The pair buckled down and got their side to 120/3 at tea, with bad light forcing the players off.

Just three more overs were possible after lunch until another enforced break, lasting half an hour.

On return, Rahane and Kohli continued to accumulate runs, taking their partnership past 50 before bad light meant an early end to proceedings.

Dinesh Karthik World Test Championship 2021 India vs New Zealand, Final Cricket
Get the latest updates on ICC T20 Worldcup 2022, check out the Schedule and Live Score. Like us on Facebook or follow us on Twitter for more sports updates. You can also download the NDTV Cricket app for Android or iOS.