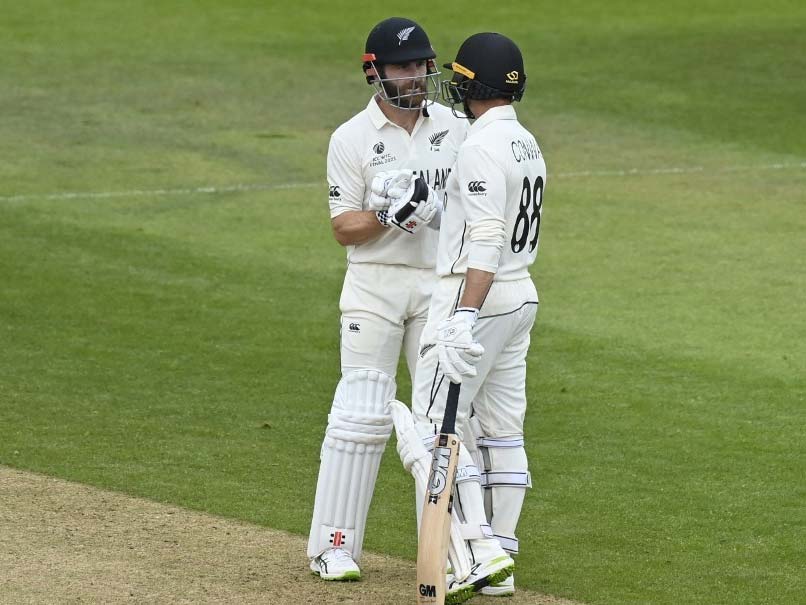 India vs New Zealand: Kane Williamson stayed at the crease till the end of Day 3.© AFP

New Zealand opener Devon Conway scored a classy half-century but soon lost his wicket to Ishant Sharma for 54 runs as New Zealand ended Day 3 on 101/2 with Ross Taylor and Kane Williamson at the crease. Bad light forced stumps again on Day 3 as umpires took the call to head back. Earlier, Latham and Conway gave their team a solid start, adding 70 runs for the first wicket in the last session on Day 3, however, Ravichandran Ashwin got rid of Latham for 30 runs. Earlier, India were bundled out for 217 runs in 92.1 overs with pacer Kyle Jamieson claiming a five-wicket haul. Jamieson took the wickets of Ishant Sharma and Jasprit Bumrah while Trent Boult took Ravindra Jadeja's wicket as India could add only six runs after Lunch on Day 3. Virat Kohli and Ajinkya Rahane top-scored with 44 and 49 runs respectively as Jamieson took control of the situation from the word go on the third Day. Play was delayed at the start of the third Day due to a wet outfield in the World Test Championship (WTC) Final. The opening day was washed out at The Ageas Bowl in Southampton on Friday while bad light led to the umpires finishing Day 2 early than its scheduled time. (SCORECARD)

WTC Final Highlights And Updates Of India vs New Zealand, From The Ageas Bowl, Southampton

Trent Boult World Test Championship 2021 India vs New Zealand, Final Live Cricket Score Live Score Cricket Live Blogs
Get the latest updates on ICC T20 Worldcup 2022, check out the Schedule and Live Score . Like us on Facebook or follow us on Twitter for more sports updates. You can also download the NDTV Cricket app for Android or iOS.