India last played in a quarter-final encounter 40 years ago in the 1978 Women's World Cup in Madrid. 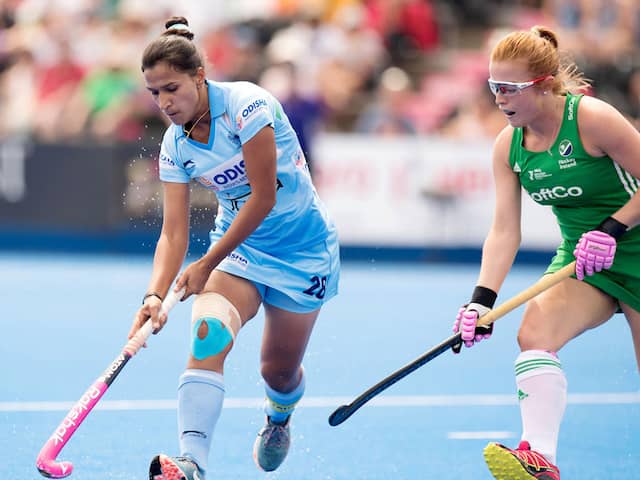 Rani Rampal believes that her team has improved with every match.© Hockey India

India will look to avenge the pool stage loss, when they face Ireland in the quarter-final of the women's hockey World Cup at the Lee Valley Hockey and Tennis Centre in London on Thursday. The world no. 10 India last played in a quarter-final encounter 40 years ago in the 1978 Madrid Women's World Cup.  The team's semi-final appearance in the inaugural edition of the World Cup in 1974 remains the best Indian performance in the history of the prestigious event. However, these stats would not play on the team's mind when they take on the World no.16 Ireland on Thursday according to team Skipper Rani Rampal.

"All I know is, we are not done yet. Our best hockey is yet to come," she asserted adding that the only thing on their minds would be to avenge their narrow 0-1 loss in the Pool Stage to Ireland and book a place in the Semi Final against the winners of Spain Vs Germany quarter-final match.

Rani said: "Though we lost against Ireland in the Pool Stage, we know we played really well that day but we did not put the ball in the goal. Now we have a golden opportunity to beat them in the Quarter Final."

In the Crossover Match against Italy, it was Lalremsiami (ninth minute), Neha Goyal (45') and Vandana Katariya (55') who scored in India's significant win.

It was a dominant overall performance that saw them make the next round and in hindsight, Rani believes the team has improved match-by-match where they have drawn 1-1 to World No.2 England, lost 0-1 to Ireland, drew 1-1 with the USA in the Pool Stage followed by a triumphant 3-0 score-line against the Italians.

"Against Italy, we wanted to ensure we score in the first two quarters and put pressure on them. In the previous three matches in the Pool Stage, we were doing everything except scoring. But on Tuesday, we ticked that box right and we have realised that it all boils down to the self-belief we have," stated the 23-year-old striker.

Beating Ireland, who are high on confidence after a 3-1 win against USA and India 1-0 to top Pool B and earn a direct qualification for the quarters, would be a tough task especially if the Irish can pull off a good start to put pressure on India's structure.

Rani though was categorical in her stance that this is a once-in-a-lifetime opportunity for her team to create history.

"For us, it is a once-in-a-lifetime moment to be playing the Quarter Final of the biggest event in hockey. We will do everything we can to win this match and make the Semi-Final and the team believes we stand a realistic chance," asserted an optimistic Rani.