India kept their hopes alive to play in the final of the Sultan Azlan Shah Cup. 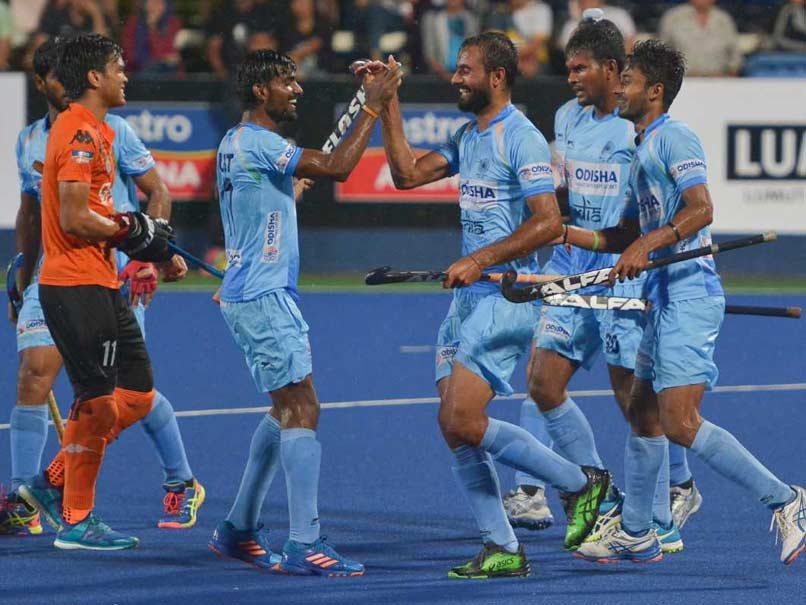 India celebrate after scoring a goal against Malaysia.© Hockey India

The Indian Men's Hockey Team rode displayed a dominating performance as they outclassed hosts Malaysia 5-1 at the 27th Sultan Azlan Shah Cup 2018 on Wednesday. Shilanand Lakra (10'), Gurjant Singh (42', 57'), Sumit Kumar (48') and Ramandeep Singh (51') scored as India kept their hopes alive to play in the final. Faizal Saari (33') was the lone goal scorer for Malaysia. Coming into the match after a stunning 2-1 win against Olympic Champions Argentina, Malaysia were quick to get off the blocks.

But it was India, who drew the first blood with an opening goal through Shilanand Lakra in the 10th minute. The new addition in the Indian team did exceptionally well to pick up a baseline pass from Gurjant Singh to tap it over the Malaysian goalkeeper fetching India 1-0 lead.

The following minutes saw Indian goalkeeper Suraj Karkera stay busy at the post as he made some brilliant saves. It was Faizal Saari's second attempt to score which was parried away by the young Karkera. He later saved another well-struck shot by Tengku Tajudin.

India did well to dominate with ball possession, while their defence stuck to their guns to deny a goal. Meanwhile, Surrender Kumar, Shilanand Lakra and Sumit Kumar worked in tandem to win the first penalty corner (PC) of the match in the second quarter but Amit Rohidas's flick was blocked away.

Just seconds before the halftime, Fitri Saari showed some good stick work to take a shot on goal but went far too wide.

India, with a 1-0 lead, had their task cut out in the third quarter.

Conceding a PC three minutes into the third quarter didn't help their cause. Faizal Saari, who had missed many opportunities to score early on, was accurate as he fiercely struck the ball past Karkera to equalize in the 33rd minute.

A PC in the 42nd minute saw Gurjant Singh hold on to the rebound after Varun Kumar's flick ricocheted off the goalkeeper. An attentive Gurjant had to tap the ball into the post to fetch India the much-needed 2-1 lead.

The action boiled down to the final quarter when India changed gears and attacked the hosts who looked like they were losing steam.

Though Malaysia won a PC at the start of the fourth quarter, Karkera, brought back into the post, did an outstanding job to save and kept skipper Razie Rahim from scoring. It was Ramandeep Singh who did well as a feeder when he brilliantly assisted Sumit Kumar who scored India's third goal in the 48th minute.

India will face Ireland on March 9 in their last round-robin match.