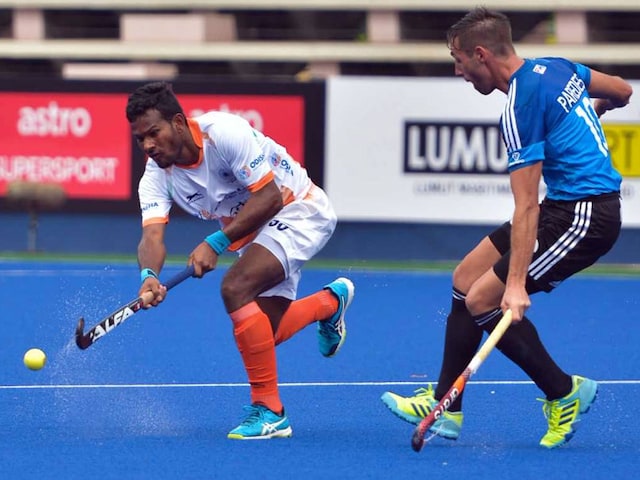 India went down 2-3 to Olympic champions Argentina in the opening match of the 27th Sultan Azlan Shah Cup hockey tournament on Saturday. All goals came off penalty corners with Argentina's Gonzalo Peillat (13', 24', 33') scoring a hat-trick while Amit Rohidas (26', 31') scored two goals for India. It was a zestful start by India who looked to dominate the first quarter as their young forwards pushed the Argentine defenders to create space in the striking circle. Talwinder Singh and debut player Sumit Kumar were impressive as they attempted to beat Argentina's experienced goalkeeper Juan Vivaldi early in the match.

India made as many as four circle entries against Argentina's two and it was Sumit Kumar's burst into the baseline that gave Indian supporters hope of a first goal within ten minutes of the match, but Argentine defenders were defiant. Minutes later, a long ball assist to Talwinder was picked up well but he couldn't quite make an effective connect to put it past Vivaldi.

Though India did well to limit Argentina's shots on goal, an infringement in the Indian circle helped Isidoro Ibarra earn Argentina the first PC of the match. With world-class dragflicker Gonzalo Peillat in their ranks, giving away PC meant trouble for India. Peillat's first attempt was blocked by first runner Amit Rohidas, but the second PC was superbly converted by Peillat fetching Argentina 1-0 lead in the 13th minute.

It was PCs that Argentina rallied on and it didn't help India's cause when they conceded another PC in the 24th minute. The mistake was punished by Peillat yet again as he broke no sweat to convert. A diving Indian goalkeeper Krishan Pathak could do little to save the powerful dragflick. Two minutes later, India won three back-to-back PCs. After the first two attempts had to be re-taken due to infringement, India were third-time lucky as Amit Rohidas improvised on Ramandeep Singh's injection, keeping low, finding the left pocket of the net. The 26th minute goal narrowed the deficit to 1-2 and India did well in the following minutes to keep Argentine forwards in the hunt. Though they forced India to make an error in the circle, winning yet another PC in the 27th minute, the attempt was brilliantly blocked by India's first runner.

Coming into the third quarter, India struck early as forward Sumit Kumar was aggressive in the baseline to fetch India their fourth PC of the match. Previous goal scorer Amit Rohidas made no mistake as he converted in similar fashion giving India the much needed 2-2 equaliser in the 31st minute. It was all about PCs for Argentina as Peillat struck his third goal in the 34th minute taking Argentina's lead to 3-2.

With rain trickling down in the fourth quarter, memories of India's Semi Final match against Argentina at the Odisha Men's Hockey World League Final was brought to the fore. India had lost 0-1 as they couldn't play their natural high-paced game on a rain-soaked pitch.

Though India fought till the final hooter just like they did in Bhubaneswar after the match restarted following a 45-minute delay due to thunder storm, their desperate attempts to score went in vain with Argentina keeping the lead.

India will take on England in their second match at 13.30 hours IST on Sunday.