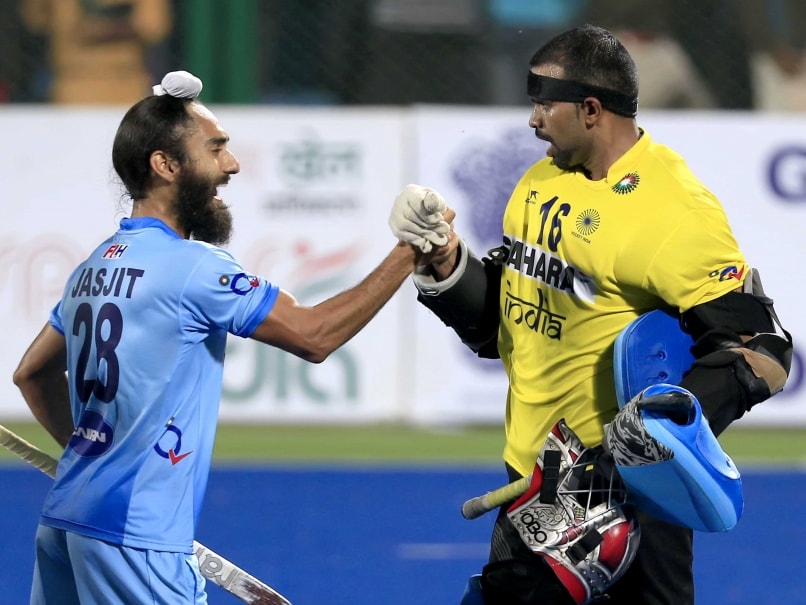 After finishing at the bottom of Pool B, India produced an inspired performance to get the better of Great Britain, who suffered their first defeat in the tournament.

"We played fantastic hockey in the third quarter. We created fantastic goal scoring opportunities, scored a fantastic goal and was unlucky when Ramandeep (Singh) struck the bar. Akashdeep (Singh) also missed one and that easily could have been three or four. So I would like to look at that side," Oltmans told reporters in the post-match press conference.Â (Highlights)

"They put pressure on our defence in the last and final quarter to get back into the game. But I must say in the end we showed the right composure, energy and fighting spirit. And I am proud of what I have seen from the boys today," Oltmans said.

Oltmans refused to talk about any individual players and credited the win to team effort.

"I never talk about individual players, I always talk about the team. It is his (Amir Khan's) first big tournament and so far he showed progress," he said.

'Need to work our mistakes'

The India coach, however, said inconsistency was a problem which the teams needs to work upon.

"We always go match by match. That always has been my approach. But I always tell the players in a tournament like this it's about match no. 4 and that is where we have to be at our best. And that is what they have shown today.

"If you ask me whether we will be able to give a performance like this again, then frankly speaking I am not sure about it. But of course in the next two days we will work towards that," Oltmans said.

India captain Sardar Singh feels the team needs to work on small things to compete against the best teams of the world.

Sardar praised his backline for withstanding the pressure exerted by Great Britain in the fourth and final quarter of the match.

"It is always a do or die situation for any team in any knockout match. If we would have been in Britain's situation we too would have exerted the same pressure on them. They put good pressure on us but we defended very well. It was a team effort and the boys showed their potential," he said.

"But as a team we need to improve more. We need to work our mistakes. If we want to compete against the best teams of the world you need to work on minor details of the game."

England coach Bobby Crutchely feels it was role reversal for his side in today's match as they committed same errors which India are used to do.

He, however, lauded India for their improved showing.

"We always knew that knockout games are going to be different. We knew India would be a big threat to us. I think we were a little passive at the start of the game. They dictated the tempo a bit although we still had our chances and the game was tight," he said.

"In the second half we imposed ourselves a lot, dominated for a long period but our execution was not up to the mark. The final pass, the final shot just was not there tonight. It's a tough lesson for our team.

"We did not play with enough tempo in our passing and didn't open up the Indian defence too often. We certainly had enough opportunities. But India defended well and deep in their circle. (PR) Sreejesh again played well in front of (Indian) goal. India are sometimes inconsistent but we know they can put in great performances. Their attacking play tonight was really good," said the Britain coach.

Asked about the format of the tournament where one bad day in office can ruin a side despite finishing the pool stages on top, Crutchley said: "I said before I don't like this format but we knew the format from the start and that can't be an excuse. We had to play good enough in the knockout to go through but we did not play enough and India did."

Comments
Topics mentioned in this article
India England Hockey
Get the latest updates on India vs Australia and check out  Schedule, Results and Live Score. Like us on Facebook or follow us on Twitter for more sports updates. You can also download the NDTV Cricket app for Android or iOS.