Indian junior women's hockey team finished on top of the points table despite losing 1-2 to Australia in their fourth and final match of the competition. 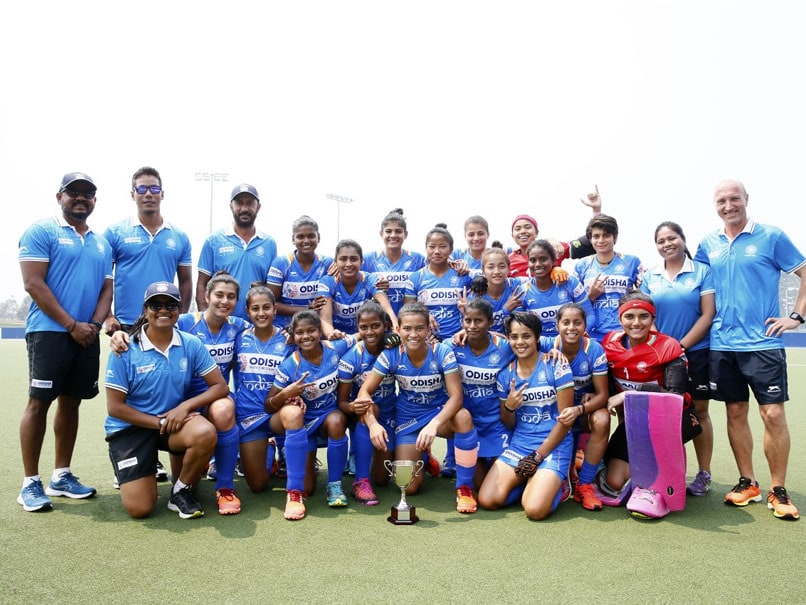 India won the tournament as they finished on top of the points table.© Hockey India

Indian junior women's hockey team on Sunday won the three-nation tournament in Canberra, Australia as they finished top of the points table despite suffering their first loss of the competition. The Indian team lost 1-2 to hosts Australia in their fourth and final match of the competition which saw India's Gagandeep Kaur score in the 53rd minute to cancel out Abigail Wilson's strike in the 15th minute. However, the Australian youngster scored yet again in the 56th minute to give her team a 2-1 win.

It was a difficult first period for the Indian team as they were constantly put under pressure by the hosts. The visitors had some chances of their own inside the first 15 minutes but the chance of the first quarter fell to the hosts, who managed to make the most of it. It was in the 15th minute that Australia were awarded a penalty corner, and it was Wilson who stepped up for the hosts to make it 1-0.

India tried to make up ground in the second quarter, but some resolute defending by the home team meant that the visitors could not equalise inside the second quarter. The Indians had a penalty corner in the 22nd minute, but could not force it on target.

Another penalty corner for India in the 26th minute saw Australia's Hannah Astbury make a diving save to help her team retain their one-goal lead. Two minutes later, Australia had a glorious chance of extending their lead to two goals through a penalty stroke, but India's goalkeeper Bichu Devi Kharibam made a fine save to keep the score down to 0-1 at the half-time break.

A similar story unfolded in the third quarter with neither side able to score.

However, the start of the fourth quarter was different for India as they put the hosts under pressure from the start, and that resulted in the visitors winning themselves a penalty corner in the 53rd minute. It was India's Gagandeep Kaur who stepped up to take the execution, and scored past to equalise for India.

But India could not stay on level terms for too long as three minutes later, it was Australia's Abigail Wilson who scored her second goal of the match through a penalty corner to snatch a 2-1 lead.

India tried to equalise for the second time during the remaining four minutes, but could not make the most of their chances as Australia registered a 2-1 win.

Despite suffering their first loss of the tournament, the Indian team won the competition by finishing top of the points table with a tally of seven points from four matches, ahead of hosts Australia on goal difference, with New Zealand finishing third with only three points from their four matches.

Comments
Topics mentioned in this article
India Women Hockey Australia Women
Get the latest updates on IPL 2021, IPL Points Table , IPL Schedule 2021 , live score . Like us on Facebook or follow us on Twitter for more sports updates. You can also download the NDTV Cricket app for Android or iOS.