The Indian women's hockey team had also lost to New Zealand and Ireland in the previous pool games. They will take on Japan in the quarter-final on Thursday. 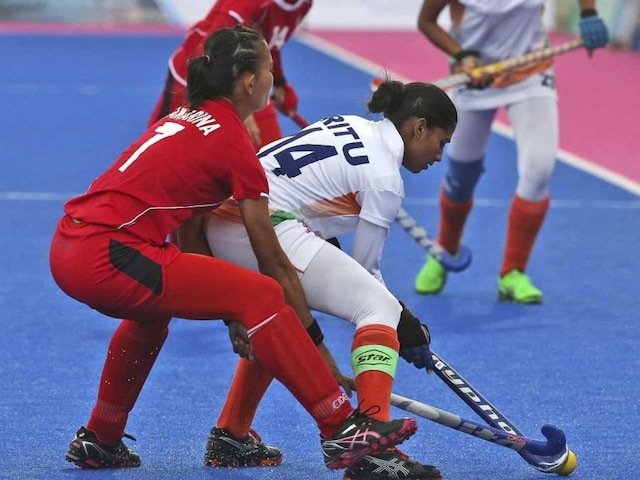 India will take on Japan in the quarter-final on Thursday.© AP

Indian women's hockey team's dismal run continued as they suffered a narrow 1-2 loss against World No.5 China in their last Pool B match of the Hawke's Bay Cup in Hastings on Tuesday. (Indian Women's Hockey Team Loses to New Zealand in Hawke's Bay Cup)

After a goalless first quarter, Rani gave India the lead in the 19th minute but Yu Qian scored the equaliser for China in the third quarter before Wang Mengyu sealed the match with another goal in the final quarter. (PR Sreejesh, Deepika win Hockey India Player of the Year awards)

The match started slowly with most of the battles taking place in the midfield and both teams struggling to penetrate the circle. China had the best opportunity in the first quarter with a penalty corner which was well saved by Savita.

India came to life in the second quarter early with Rani scoring off a swiftly-worked counter from the right, giving India the lead. China immediately hit back and won a penalty corner but another save from Savita ensured India went into the break with a 1-0 lead.

The third quarter saw resolute defending from India as China controlled most of the possession. Monika, in particular, was very good at marshalling the defence and dropping deep to ensure the numbers denied China openings for goal. With the last play of the quarter left, China scored the equaliser through Yu Qian.

The final quarter saw several chances fall for both teams as they tried to take full points. Deepika, took charge and had a couple of half chances that went wide of the post. Wang Mengyu scored the winner for China through a penalty corner with five minutes left on the clock.

Speaking after the game, coach C.R. Kumar said, "We gave a tough game to a team which is higher ranked than us. Crucial mistakes at the end of the final quarter denied us the points. Our defence was secure, but we now need to focus on getting the ball upfield quicker to score goals."

India play Japan in their quarterfinal on April 7. India lost to New Zealand (0-1) and Ireland (0-4) in their previous two matches.