Members of the Indian men's and women's hockey teams were given a grand welcome as they arrived at the Bhubaneswar airport in Odisha. 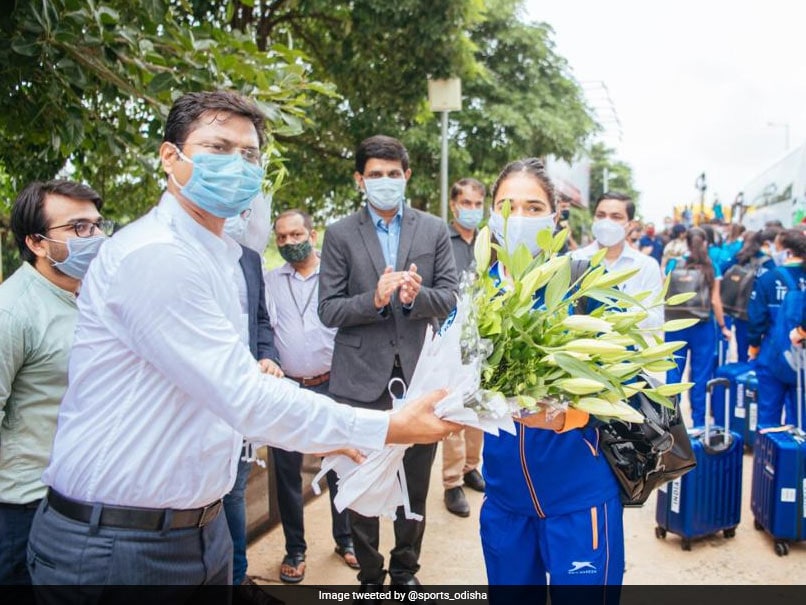 Members of the Indian hockey teams received a grand welcome upon their arrival in Bhubaneswar.© Odisha Sports/Twitter

The members of the Indian Women's and Men's Hockey Teams were given a grand welcome as they arrived in Odisha. The hockey players received a rousing welcome on their arrival at the Bhubaneswar airport where state Sports and Youth Affairs Minister TK Behera and former Indian Men's Hockey captain Dilip Tirkkey were present to greet them. The players were taken on two separate buses to a hotel where they will relax for some time before attending the state-level felicitation programme to be attended by Chief Minister Naveen Patnaik.

According to the schedule, the team will have lunch at the hotel and then have an interaction with journalists before leaving for the Kalinga Stadium.

Both the teams will have a photo session with the Chief Minister at the Kalinga Stadium.

In the evening, the teams will leave for the Lok Seva Bhavan where they will be felicitated by Patnaik. The teams are also scheduled to have dinner with the chief minister at Kalinga Stadium.

The state capital was decorated to welcome the Olympic heroes with posters, banners and hoarding put up on both sides of the roads between the airport and their hotel. They were welcomed by blowing conch shells, garlands and tika.

Besides, Odisha's traditional and folk dance groups performed on the road to welcome the heroes.

The people of Bhubaneswar, mostly students, also gathered on the roadside to welcome the hockey heroes.

The Odisha government is the official sponsor of the Indian Hockey Teams since 2018. The men's team won a medal at the Tokyo Olympics after a gap of 41 years.

Comments
Topics mentioned in this article
India India Women Olympics 2020 Hockey
Get the latest updates on ICC T20 Worldcup 2022 and CWG 2022 check out the Schedule, Live Score and Medals Tally. Like us on Facebook or follow us on Twitter for more sports updates. You can also download the NDTV Cricket app for Android or iOS.